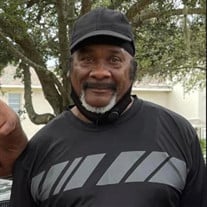 Jimmie Hogan was born on August 24, 1954, to Louise Mami Hogan and George Major Hogan in Rome, New York. However, he and his parents moved to Orlando, Florida. Jimmie Hogan made his presence known in the Winter Park community, where he made many lifetime friends. Jimmie met Joann Quinn in 1976 as friends. After years of friendship, they stared dating in 1992. On December 30, 1999 they were united in Holy Matrimony. They were inseparable until his demise. He was both a devoted husband and a devoted father to six children, three boys and three girls. He was very loyal to other members of his family as well. He was a leader, protector, provider and consoler. He had a big heart for those he loved, and that love was immeasurable. Two of Jimmie’s favorite pastimes were fishing and playing cards. He mastered the game and was undefeated sitting at any card table. Jimmie was a professional welder and conquered anything he put his mind to. He embraced life and lived it to the fullest. On March 26, 2022, God called Jimmie from earthly labor to his final resting place. He will be deeply missed by his beloved family and many friends. He is preceded by his mother, Louise Hogan and father, George Hogan. Two sons Alton King, and Christopher Williams. Two brothers, George Hogan and Eddie Hogan. Two sisters, Joanne Hogan and Christine Hogan. To celebrate his life, he leaves cherished memories with a loving wife: Joann Hogan, Altamonte Springs, Florida; three sons: Jimmy Hogan Jr. (Sunitia), Apopka, Florida, Landon Ball (Iesha) Orlando, Florida, and Jawuan Quinn, Altamonte Springs, Florida; four daughters: Christine F. Hogan, Orlando, Florida, Dominque Moore, Orlando, Florida, Shatara Hogan (Antonio), Orlando, Florida, and Lashana Quinn (Antonio) Orlando, Florida; one sister: Ella Hogan, Orlando, Florida; three brothers: Richard Hogan Orlando, Florida, William Hogan (Lori) Orlando, Florida, and Billie Hogan (Sabrina) of Orlando, Florida; He also leaves behind sixteen precious grandchildren, many nieces, nephews, cousins, other relatives and a host of friends.

Jimmie Hogan was born on August 24, 1954, to Louise Mami Hogan and George Major Hogan in Rome, New York. However, he and his parents moved to Orlando, Florida. Jimmie Hogan made his presence known in the Winter Park community, where he made... View Obituary & Service Information

The family of Jimmie Hogan created this Life Tributes page to make it easy to share your memories.

Send flowers to the Hogan family.