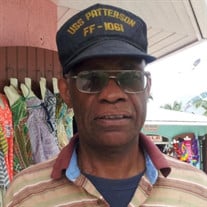 James L. Swilley was born February 4, 1950 in Philadelphia, Pennsylvania to McCoy and Helen Swilley. He attended and graduated from Murrell Dobbins Career and Technical Education High school in Philadelphia, Pennsylvania in June, 1967. James who was called by his family and friends “Jimmy” joined the U. S. Navy immediately after graduating from high school. Jimmy was stationed in Charlotte, South Carolina for a few years. While stationed in Charlotte, South Carolina he was blessed with his daughter (his “baby girl”), Corelle Owens. Jimmy’s Navy basketball team was assigned occasionally to play games at Orlando’s Navy Base where he met the love of his life, Faye Benton. Jimmy and Faye began a long distance relationship encouraging each other with their favorite song at that time: “Someday We Will Be Together.” September 19, 1976 they were joined together in holy matrimony. From this union, their son Jason was born. Jimmy was proud to serve his country and felt honored to be called a Veteran. Jimmy was a faithful employee for the Post Office for over 30 years until he retired April, 2011. Jimmy’s analytical and inquisitive personality stood out to his family and friends. Before becoming a bonafide man of faith, he went through a phase of analyzing and questioning a calling he just did not understand. One day, he said to his wife with delight: “I do not understand everything about the Christian faith, but, I do know there is something to it”. After that statement, his family began to notice his commitment to God. Our dear Jimmy, God saw you were getting weary so He did what He thought best. El Olam, The Everlasting, The Eternal God stood beside you and whispered: “Jimmy, come and rest”. On Saturday, January 30, 2021 at 4:55am an angel was dispatched to come and usher him to his eternal resting place. Jimmy was preceded in death by his mother, Helen Swilley and father, McCoy Swilley. Jimmy leaves to cherish precious memories to his loving and devoted wife: Faye Swilley of Apopka, Florida; daughter: Corelle Owens of Mableton, Georgia; son: Jason Swilley of Apopka, Florida; sister: Audrey Swilley of Sanford, Florida and brothers, Ronald Gilliam of Churchville, Pennsylvania and Kenneth Dennis of Los Angeles, California; a host of nieces, nephews, cousins other relatives and sorrowing friends.

The family of James L. Swilley created this Life Tributes page to make it easy to share your memories.

Send flowers to the Swilley family.