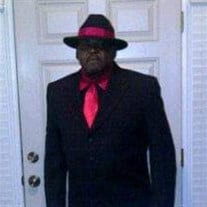 James -The Beginning James was born on November 16th, 1953 in Shellman, Georgia, to the late James L. Johnson, Sr. and Mary Jane Thomas. At the age of five, he moved with his mom and sister to Apopka, Florida. James-The Growing Phase James... View Obituary & Service Information

The family of James Lee Johnson, Jr. created this Life Tributes page to make it easy to share your memories.

Send flowers to the Johnson, family.