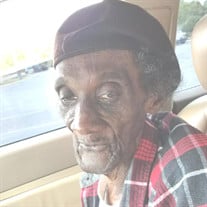 James H. Crews was born on October 31, 1930 in Fort Gaines, Georgia to the late Isom and Mamie Crews. When James became an adult, he moved to Detroit, Michigan, where he worked for the Ford Motors Company. After years of being in Detroit, he gained a beautiful daughter by the name of Cynthia Taylor. James was not only her father, but also her Angel whom he always protected. Cynthia and James later moved from Detroit, Michigan to Tampa, Florida where his four siblings resided. James was highly known as one of the best plumbers in Tampa, Florida. He not only worked as a plumber but also as a construction worker. James was a man of multiple talents, and he had a great love for whatever he did. James was not only an angel to his daughter Cynthia, but was also a dad, grandfather and an angel to his granddaughter, Shawntray Taylor. From the beginning, James and Shawntray formed an unbreakable bond. In 1995, James left Tampa, Florida and came to Orlando, Florida. He lived with his daughter Cynthia and kids until his granddaughter Shawntray graduated from high school. He then moved with her and her kids, which was his dying wish to be with Shawntray until God called him home. There were many obstacles, but they managed to overcome with always having a “I love you” from each other and a “We made it Tray, God brought us through”. James had a great loved for his family. One of James’ saying was, “Just Keep Living”. James often talked about his mother, Mamie and how she raised him and his two sisters Louvenia “Lou” and Hattie. He would share how she’d have them in the kitchen teaching them how to cook and sew and how they would get in the dirt and plant their own garden. He also had a love for flowers. James was a great cook and taught those same cooking and sewing skills to his granddaughter, Shawntray as well as her kids. He would get up early in the morning at 5:00 a.m. to cook breakfast and get his great grandkids ready for school. On Sundays, he would get five days of school clothes and iron and hang them up for all four of his great grandkids. Cynthia and Shawntray’s friends also knew James as “Daddy”, because once he entered your heart he stayed. He had the same love for family and friends alike. James was preceded in death by his Father, Isom Crews; Mother, Mamie Crews; Brothers: Edmond Neves, Willie D. Neves and John Neves; Sisters: Hattie Daniels, Alma Neves and Louvenia Wallace; Grandsons: Gerard Black and Tevin Davis. He leaves to cherish his memories: Daughter, Cynthia Taylor; Granddaughter, Shawntray Taylor; 5 Grandkids; 12 Great Grandkids; 2 Great-great Grandkids and a host of sorrowful Nieces, Nephews, other loving relatives and Friends.

James H. Crews was born on October 31, 1930 in Fort Gaines, Georgia to the late Isom and Mamie Crews. When James became an adult, he moved to Detroit, Michigan, where he worked for the Ford Motors Company. After years of being in Detroit, he... View Obituary & Service Information

The family of James H. Crews created this Life Tributes page to make it easy to share your memories.

Send flowers to the Crews family.