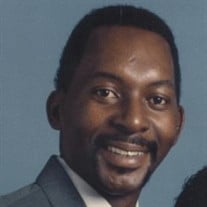 James Edward Cooper was born January 29, 1955 to Roosevelt Cooper and Katherine Sapp Cooper in Quincy, Florida. James attended St. John Elementary School in Quincy, Florida. Upon moving to Orlando he attended Callahan Elementary School and graduated from Jones High School in the Class of 1973. He met Loretta Jenkins and during their relationship they were blessed with two sons, Lorenzo Rosemond and Justin Cooper and a daughter, Amara Beckford. James worked for Robb and Stucky Furniture Store for 30 years. He also worked for Slone Brothers Furniture Store for 13 years. James was the foundation that kept the family together. James will be greatly missed and remembered for his kindness, love, strength and for being a father and companion. James was preceded in death by his parents, Roosevelt Cooper and Katherine Sapp Cooper; brother, Franklin R. Cooper and sister, Corinne Cooper Johnson. The Lord in His infinite wisdom deemed it timely to call from our midst our dearly beloved James, on Monday, October 26, 2020. His departure is a deep and personal loss to his family and many friends and he will be greatly missed by them all. James leaves to cherish precious memories to his companion: Loretta Jenkins of Orlando, Florida; sons: Justin Cooper (Penny) and Lorenzo Rosemond, all of Orlando, Florida; daughter: Amara Beckford of Orlando, Florida; siblings: Alonzo Cooper of Gainesville, Florida, Kathy Cooper Carr of Orlando, Florida and Tracey Y. Fortune (Roosevelt) of Apopka, Florida; sisters-in-law: Marilyn Bradley of Gainesville, Florida and Jennifer Lee (Vincent) of Orlando, Florida; brother-in-law: Leotis Jenkins of Orlando, Florida; eight grandchildren; two great grandchildren; a host of aunts, uncles, nieces, nephews, cousins other loving relatives and sorrowing friends.

The family of James Edward Cooper created this Life Tributes page to make it easy to share your memories.

Send flowers to the Cooper family.