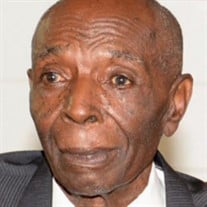 James C. Butler, Jr. was born November 8, 1937 in Fayette, Mississippi to James C. Butler, Sr. and Hilda Scott. He attended Jefferson County Public Schools. One day in 1964, James decided to leave his hometown and relocate to Florida. After living a number of years in Florida, he wanted to experience life in the “Big Apple” so he moved to New York. Life in the “Big Apple” was full of hard work, fun, adventure and COLD. James longed to go back to his southern roots and returned to Florida in 1978, making it his final home in this life. James studied and accepted the Seventh Day Adventist message and was baptized at the Mt. Olive SDA Church in the early 1980’s. While serving there, he met Betty G. Lockhart and they were united in Holy Matrimony, on November 10, 1985. James was a faithful member, serving as an Usher and Deacon of the Mt. Olive SDA Church until 1999, when he moved his membership to Bethel SDA in Orlando, Florida. James was preceded in death by his wife, Betty G. Butler and parents: James and Hilda Butler. He leaves to cherish his memories: Son, James C. Butler, III of Fayette, Mississippi; Five Stepdaughters: Denise L. Tarver, Janice L. Thompson (Leon), and Phyllis L. Crittenden (Rodney), all of Apopka, Florida, Cynthia L. Sims of Syracuse, New York and Rhonda L. Smothers (Samuel) of Orange City, Florida; One Sister, Mary Louise Culbert (Mack) of Fayette, Mississippi; 21 Grandchildren, 33 Great Grandchildren; and a host of nieces, nephews, cousins, other loving relatives and friends

The family of James C. Butler, Jr. created this Life Tributes page to make it easy to share your memories.

Send flowers to the Butler, family.