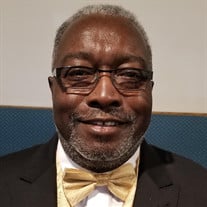 To view the service for Isaac "IKE" Johnson's live stream please use the link below: www.facebook.com/ZandersFuneralLIVE A husband, father, grandfather, son, brother, uncle, cousin and friend To every thing there is a season, and a time to every purpose under the heaven: A time to be born, and a time to die; a time to plant, and a time to pluck up that which is planted; A time to kill, and a time to heal; a time to break down, and a time to build up; A time to weep, and a time to laugh; a time to mourn, and a time to dance. Ecclesiastes 3:1-4 (KJV) Isaac “Ike” Johnson, the fourth child of William James Johnson, Jr. and Addie Ree Johnson, was born in Colquitt, Georgia on July 13, 1950. Following the passing of Ike’s mother, his father moved to Orlando where he met and married Ethel Mae, who raised Ike and his siblings. Isaac accepted Christ at an early age, and connected with Shiloh Baptist Church of Orlando. Over the years, he served in the Choir, Usher/Greeter Ministry, Married Couples’ Ministry and the Bountiful Harvest Food Pantry. He is a proud graduate of Jones High School, class of ’68. He continued the orange and green tradition by attending Florida A & M University. He served in the U.S. Navy, and was honorably discharged in 1979. He’s worn several employment hats over the years, and in each of them he was faithful and dedicated to the task at hand. He retired in 2017 from Argos Industries. Ike met and fell in love with Angelia Mosley, and the two were joined in matrimony in May of 2000. When these two gregarious, outgoing people united, it was a union of kindred spirits, common goals and interests, and the blending of devoted families. Ike never met a stranger, and had a knack for making everyone he met feel special and loved. He loved the Lord, adored his family and valued his friendships. Whether you knew him as Baby, Pee Wee, Answer Man, Peezle, Grandpa, Uncle Isaac, Cuz, Cuzzo, Ike, Deek or any other name, you knew that you had a fully committed friend. He was preceded in death by his parents, brother Samuel Johnson and sisters, Bernice Johnson and Helen LeGree. He leaves to cherish his memory his devoted wife of 20 years: Angelia Mosley Johnson; his sons: Derrick Robinson and Sammy Hill, Jr.; his grandchildren: Quianna, Destyni, Trinity, Huriyah, Makayla, Samaria, Serena, Zamaria, Sammy III and Saige; his sisters: Jerelene Smith (Stonewall) and Annie Johnson; numerous nieces, nephews, cousins, sisters-in-law, brothers-in-law, and friends.

To view the service for Isaac "IKE" Johnson's live stream please use the link below: www.facebook.com/ZandersFuneralLIVE A husband, father, grandfather, son, brother, uncle, cousin and friend To every thing there is a season, and a time to... View Obituary & Service Information

The family of Isaac "IKE" Johnson created this Life Tributes page to make it easy to share your memories.