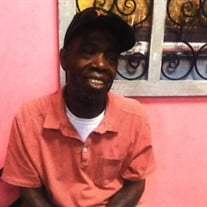 To view the service for Ian Hodge’s live stream please use the link below: www.facebook.com/ZandersFuneralLIVE Ian Hodge, the son of Benjamin Burnett and Eleanor Hodge was born on Thursday, December 27, 1951 in Guyana, South America. Ian was affectionately known as “Goja” a name he acquired while selling Goja, a spiced coconut turnover with his grandmother at an early age. As a youth, he attended Grove Anglican School, and later attended Diamond Trade School where he exited with a machinist certification. Ian soon became an apprentice at the Diamond Sugar Estate where he worked as a machinist until migrating to the United States to reunite with his mother and siblings in the early 1980’s. After his migration to the United States, Ian continued in his trade as a machinist with HD Metal in Brooklyn, New York. In 1983, Ian met Bertha Ford in New York and they were married by 1985. Shortly before Ian wed, he embarked on a career with the City of New York’s Department of Housing Preservation and Development as a Housing Inspector until he retired. After retirement, he relocated to Florida to join his wife Bertha. First and foremost, Ian loved the Lord, and would spend time listening to and reading the Bible. He was also an avid reader and had a love for music. Ian would spend hours listening to music as he would whistle and sing along to a variety of melodies. Ian also enjoyed many sports and one of his favorite pastimes was watching classic western films. As a result of Ian’s firm belief in God and his devotion to his family, he kept the faith and was stalwart through his struggles. He fought a valiant fight and is now flying with the angels as Heaven is now his home. Ian was called home on Thursday, April 22, 2021. In addition to his parents, Ian was preceded in eternal rest by his brother, Kennard Hodge. Those who will dearly miss him and cherish his memories are his Wife, Bertha Hodge; Daughters: Tabitha Hodge and Shamala Hodge; Granddaughter, Olivia Hodge; Sisters: Lorraine Bruce, Verma Springer, Marilyn McKoy and Joan Hodge; Brother, Cecil Hodge; as well as many Nephews, Nieces, Cousins, other loving relatives and Friends. Although he has left this earth, he will remain in the hearts of each of his friends and family members until they soon meet again. His loved ones will find comfort in knowing that he is now at peace with our Lord and Savior. Hallelujah.

To view the service for Ian Hodge&#8217;s live stream please use the link below: www.facebook.com/ZandersFuneralLIVE Ian Hodge, the son of Benjamin Burnett and Eleanor Hodge was born on Thursday, December 27, 1951 in Guyana, South America.... View Obituary & Service Information

The family of Ian Hodge created this Life Tributes page to make it easy to share your memories.

To view the service for Ian Hodge’s live stream please use the...

Send flowers to the Hodge family.