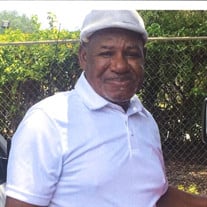 Hurvis “Mann” Winters, Sr. was born June 30, 1940 in McCool, Mississippi to James A. and Eleanor Winters. Hurvis found his home in Orlando, Florida in the 1960’s. Hurvis was known to most and many as “Mann” and was truly loved. Mann was a great fisherman and hard worker. He retired from the Citrus Industry. He always greeted everyone with a smile, respect and kind words. Mann was a great husband, father, grandfather and great grandfather and he will be truly truly missed by all. Mann was preceded in death by his parents: James A. and Eleanor Winters; son, Madrell Winters; and brothers: Robert Winters and Willie Charles Winters. As God transitioned him home, he leaves to mourn his devoted and loving wife, Violet Winters of Oakland, Florida; six sons: Hurvis Winters, Jr. (Toni), Demond Winters, Alonzo Hamilton, Lovis Wright, Jerry Bacon (Jasmine) and James Anthony Bacon, all of Orlando, Florida; six daughters: Flora Ann Winters, Priscilla Winters, Tresha Winters, Juanita Flowers, Bertha Bacon and Cynthia Hamilton, all of Orlando, Florida; 40 grandchildren and a host of great grands, nieces, nephews, aunts and heartfelt friends.

The family of Hurvis “Man” Winters created this Life Tributes page to make it easy to share your memories.

Send flowers to the Winters family.