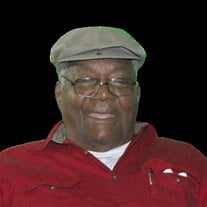 Henry McCall, affectionately called “Booster” was born March 11, 1933 in Madison, Florida. His parents, Willie McCall and Emma Lamb instilled Christian values and work ethics into each of their 10 children. Booster moved to Eatonville, Florida in 1956. He immediately started working for Mr. ST Thomas, who had a business taking a crew to New York for the ‘season.’ Booster met the love of his life, Eddis, one of Mr. ST’s daughters. They were married in 1958. Five children were born to this union: Tina, Henry Vincent, Tammi, Victor “DD” and Vaughn. Booster was a jack-of-all-trades. In his early years, he was employed by Orange County Commissioners as a hauler and later as a fogger for the Mosquito Control (now called Arthropod Control). He learned that being an entrepreneur was more to his liking. Booster and his brother Jesse operated McCall’s Ambulance Service. Booster was also known as Eatonville’ Ice Cream Man. Through the years, Booster became a skilled handyman, who could fix just about anything. He started his own business, McCall’s Appliance Repair. He was well known for his efficiency in servicing stoves, refrigerators, washers, dryers, etc., for local residents until his retirement. Booster had a great fondness for animals. His two constant companions were Molly, a black and white cocker spaniel and later Tyson, a chihuahua. He loved his dogs. He cooked their food and did not leave home without them. Although Tyson came along after Molly passed, he received the same care as Molly. When Booster was able to drive, you could see one of the dogs sitting in the driver’s seat or hanging out of the passenger window of his truck. He would often have one of his children or grandchildren purchase raw peanuts so he could feed the squirrels while sitting on his porch. Tyson was not bothered at all by this regular practice. Booster and his constant companion spent many days visiting his sister Emma Pinkard, and his nieces and nephews. He always had a great sense of humor. He and his late brother J.B., would get together to see who could tell the biggest lies. Their banter would have everybody in stitches, laughing to tears. Those that have proceeded Booster in death are: his parents, Emma Lamb and Willie McCall; five brothers, Willie, James, Jimmy Bell, Johnny and Jesse; and one grandson, Altorio Terrell Smith. On February 10, 2021, Henry was called home to be with the Lord, while surrounded by his loving family. He leaves to cherish fond memories: seven children, Tina Waters, Orlando, Henry Vincent (Marcia), Atlanta, GA, Tammi Amos (Roland, deceased), Orlando; Victor “DD” McCall, Orlando, Angela Anderson, Eatonville, Vaughn, Orlando and Artaveince, Orlando; ten grandchildren, Tiffany Simmons, Orlando, Michael Simmons, Orlando, Rachel Dudding, Virginia, SaDarius Smith (Jamie), Alabama, Timothy Beacham, Jr. (Ciara), Orlando, Tara Beacham, Orlando, Vanessa Watson (Chris), Altamonte Springs, Vaughn II, Apopka, Stephen Nichols, Orlando, Artaveince Jr. and A’leyiah, Orlando; ten great-grandchildren; four sisters, Elouise Brown (Leroy), Orlando, Mazie Arnold, Madison, Nellie Ross, Madison and Emma Pinkard, Eatonville; two sisters-in-law, Dollie Ann and Dorothy, Eatonville; and a host of nieces, nephews and other relatives and many friends.

The family of Henry McCall created this Life Tributes page to make it easy to share your memories.

Send flowers to the McCall family.