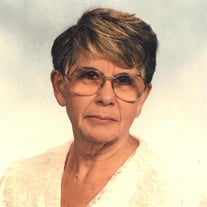 Haydee Irene Avila Cordero was the last of ten children born to Esteban Avila and Felicita Cordero in beautiful Vieques, Puerto Rico. She entered the world on July 15, 1930. Haydee and her nine siblings moved with their mom to St. Thomas, U.S. Virgin Islands to live with her eldest brother after the death of her father. At the tender age of three, she began to enjoy all the childhood pleasures the island had to offer, i.e., swimming, walking the beach, playing with her siblings, and especially playing dolls with her best friend, and favorite sister, Eloise. She also enjoyed visiting her Aunt Victoria's house, where treats were always guaranteed. Haydee was a devout Roman Catholic and attended and graduated from St. Thomas Catholic School. At the age of 18, Haydee moved to New York with her sister, Eloise, where she married Peter Gonzalez and had two beautiful daughters, Raquel and Haydee. Following their divorce, a kind gentleman, Rafael Santana, happened to knock on her door selling Christian literature. She accepted Bible studies from him and was baptised at Shiloh SDA Church in New York. Subsequently, in l954, she and Rafael married and moved to Chicago. That union produced her third daughter, Doris Elizabeth "Liz." Haydee loved gardening and her botanical garden with all kinds of herbal plants and spices attested to her "green thumb." She was also a lover of music and was always singing hymns at home. Additionally, her angelic alto in the church choir was amazing. Then, there was her love for dogs! Oh, how she loved her dogs!! Liz recalls, as a little girl, going with her mom and dad to give Bible studies, and to parks to hand out Centinellas to anyone who would accept them. Sharing God's word was their real passion. After Rafael passed, while her membership was still at Forest City Spanish Church, because of the love she received, she began to attend Maranatha. She moved to Florida Living and always requested tracts to share with other residents while at physical therapy or dining. When she felt strong enough, she would use her walker, and go to the lobby to hand out her tracts. If she had enough energy, she would even go to other residents' rooms to share tracts and offer to pray with them. On Wednesday, February 17h, her strength failed and her life on this earth ended. She now sleeps, awaiting her Savior's return. Haydee is survived by her daughters, Haydee Hernandez and husband Hector, Doris Elizabeth Santana, and husband, Nilo Rodriguez; four grandchildren, David Dieppa and wife Melonie, Laura Santiago and husband Peter, Kenneth Hernandez, Joy Hernandez, and husband Hecnor; eight great-grandchildren, Brittany Parrish and husband Benjamin, Eyva and Annaliese Santiago, Hannah, Noah, and Micah Dieppa, Zion and Skyler Hernandez: several nieces, nephews, cousins and a dear family caregiver, Isabel Oris.

Haydee Irene Avila Cordero was the last of ten children born to Esteban Avila and Felicita Cordero in beautiful Vieques, Puerto Rico. She entered the world on July 15, 1930. Haydee and her nine siblings moved with their mom to St. Thomas,... View Obituary & Service Information

The family of Haydee Irene Santana created this Life Tributes page to make it easy to share your memories.

Send flowers to the Santana family.