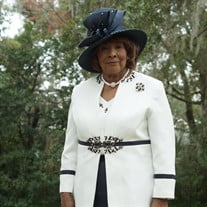 Mother Harriette Yvonne Masongale Dawkins James took flight to her heavenly home and landed safely in the arms of the Master on Saturday, April 9, 2022. On December 15, 1935, she was born to devout Christian parents, the late Doyle Masongale and Amanda Celestine Jones. She was also the only sister to brothers, Lardrell McDaniel and Earnest Jones, also deceased. She experienced more heartbreak with the death of her three sons and a grandson: her son and pastor, Elder Mitchell Dawkins Sr., sons Darryl Dawkins, and Harold “Chico” Dawkins; grandson, Ricardo Clay. She was born again and baptized at the tender age of ten and was a member at Antioch Primitive Baptist Church, molded in ministry alongside her mother under the leadership of Reverend C.L. Jones and Dr. W. D. Judge. She served faithfully until her membership changed once her eldest son Mitchell became Pastor at the New Warner Chapel Primitive Baptist Church in Winter Park . Her formative years of education began at Hungerford Elementary and Middle School, in Eatonville, Florida before matriculation to Jones High School, Orlando, Florida. It was at JHS that she hailed as a standout point guard on the girls’ basketball team, leading them to state! She was also the first Black majorette for the Lily White Society, which was the largest benevolent organization in the state at that time. Harriette earned a basketball scholarship to attend FAMU (1953-1955). She was one of the first Black females to play for the Rattlers. Her tenure at the university, shortened by financial constraints beyond her control, caused her to continue her educational pursuits in West Palm Beach, Florida where she studied to become a tailor. It was in West Palm Beach that she met and married Frank Dawkins. They began their family and relocated to Orlando, Florida. Harriette was employed at Sears Roebuck & Company as a Senior Secretary. She also attended Mid Florida Technical College, receiving further training as a tailor. She was an employee of the Orange County Public School System as a substitute teacher. She was a Grammarian (someone who studies, writes about, teaches, and/or loves grammar)! As a faithful member of New Warner Chapel, she served on the Mothers Board and the Pastor's Aide Ministry. She taught Sunday School, a spirited gospel singer; she was a speaker at various worship services and programs. She was also an active servant in the South Florida Progressive Primitive Baptist Church School Convention and Association, leading the Women’s Congress as President for nearly 15 years, ending her tenure President Emeritus. Her outstanding leadership earned her many accolades and recognitions. A teacher of the Word, a witness to the lost seeking the Savior, a confidante, a profound speaker. This self-proclaimed Duchess, was a regal, strong, and proper woman who impacted the many lives she touched. Left to cherish her memory are her loving children: Troy Dawkins (Irene), Amanda Clay (Fredric), LaShawncia Merchant (Darryl), Lemmual Reid (Daphne) and John Hightower (Tabeth); 37 grandchildren, and a host of great grands, nieces, nephews and rejoicing family and friends!

Mother Harriette Yvonne Masongale Dawkins James took flight to her heavenly home and landed safely in the arms of the Master on Saturday, April 9, 2022. On December 15, 1935, she was born to devout Christian parents, the late Doyle Masongale... View Obituary & Service Information

The family of Mother Harriette Yvonne Dawkins James created this Life Tributes page to make it easy to share your memories.