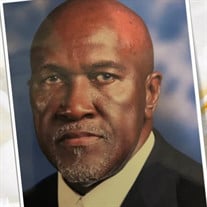 Harold- The Beginning Harold Edward Ford Jr. was the First of four children born to Mr. Harold and Christine Smith Ford on November 4,1951 In Orlando Florida born and raise. He attended Jones High School in Orlando Florida. Harold and his family were faithful members of Tabernacle Missionary Baptist Church in Orlando Florida. He later in life join New Bethel A.M.E church of Altamonte Springs, Florida. Harold- The Growing Phase At the age of 17, Harold began working with Bruton and Zanders Funeral Home in Orlando, Florida conducting death calls for the area of Orlando and Washington Shores. They also provide ambulance for the black community during those time their wasn't a ambulance service for the black pregnant women. After working their for serval year Harold want something better for himself. He venture out into the industry society work force. He worked for a paper company call UniJax working in the warehouse loading trucks for serval years. Harold seeked better employment and joined the company PEC Industries of Orlando, Florida. worked his way up to Waste Waster Manager until their doors closed. Harold then enter into trucking Driving school and obtain his A-class driver's license. he worked with serval concrete company. He excelled at every concrete company he worked always becoming the Driver Trainer Manager for all new drivers. While working as truck drive he also work part time with Marvin C Zanders Funeral Home of Apopka, Florida as a driver. After working for Florida Rock, Bedrock and A1-Block all of Orlando, Florida for serval years he retired from driving trucks and continue working his true passion his first calling working with Late Marvin C. Zanders Funeral Home. Harold sat on the Advisory Board of Adjustments in Eatonville Florida for serval years. He love to play horse shoes, loved his Orlando Magic, FSU (Florida State University) college football team and his favorite NFL football team of all time the mighty one and only Pittsburgh Steeler. Harold - New Beginning In 1988 Harold and His Harold Ford Sr. became the Father figure for Five children left behind after his youngest sister death. Eventually Five more kids came to live with them along with their mom. By 1992 all of his niece and nephew were under one roof until they moved out or when off to college. He was a great influence to all of them all always advising them to get a good education or college to get a good job or take a trade. In 1992 Harold met the Mrs. Ford to be, the love of his life after begin a bachelor for over 40 years. On March 14,1992 Harold Edward Ford Jr. of Orlando, Florida and Lillie Ruth Mcknight of Eatonville, Florida were married and became one in the sight of God. In this union we each had one son Richard Scott and Leshane McKnight. He was a great mentor to them both as well as the 14 nieces and nephews he helped guide and raised with his father, not excluding all the other nieces and nephews he gained from his marriage. They all loved him and he loved them. Thank God for this union of 29 years. On October 15,2021 The Lord our God Jesus Christ escorted Harold Edward Ford, Jr. to his eternal home. His Departure is a great loss to his family and all those who knew and loved him, He will greatly missed by all. Harold was preceded in dead by his parents, Deacon Harold E. Ford, Sr. and Christine Smith Ford, two sisters Mary Edna Ford Williams and Cynthia Delores Ford Deme. He leaves to cherish his memory his wife, Lillie Ruth Ford, of Eatonville, Florida, Two son, Richard Scott of Orlando, Florida, and Leshane A. McKnight of Eatonville, Florida. One Sister. Helen P. Ford of Orlando, Florida, One mother-in-law, Delores P. McKnight, Eatonville, Florida Three sister-in-law's: Mildred E. Mcknight of Orlando, Florida, JoAnn P. Wilson (Levon) of Casselberry, Florida. Jocinda Phillips (Leroy) of Winter Park, Florida, Four Brother-in-Law's, Moses McKnight of August, Georgia, Clayton E. McKnight of Titusville Florida , Kenneth McKnight (Geanna) of Eatonville, Florida, Kevin L. (Tasha) of Delton, Florida, Eight Grandchildren, Sherick Brinson of Eatonville, Florida, Jakalyn McKnight of Orlando, Florida, Tahjah McKnight of Orlando, Florida Shaquetta Scott of Fort Lauderdale, Florida, Richard Scott Jr. of Orlando, Florida, Tyesha Scott of Orlando, Florida, Tysheika Scott of Atlanta Georgia, Shacora Scott of Orlando, Florida, Two Great grand Daughters, Kyla Brinson of Eatonville, Florida and Kali Brinson of Eatonville, Florida Five Aunts, Mable McKnight of Eatonville Florida, Lucinda Johnson (James) of Eatonville, Florida, Lillie Mae Harvin (Norman) of Columbia, South Carolina, Ophelia Thomas of New York, New York, Juliann Montgomery of Washington, D.C One Uncle, James Pringle(Daisy) of Baltimore, Maryland one special God Son Ryan Swann of Winter Haven, Florida, Three God Daughters, Satoris Fowler, Brianna, Tianna Fowler. And numerous of nieces, nephews, cousins with special longtime friends.

The family of Harold Edward Ford, Jr. created this Life Tributes page to make it easy to share your memories.

Harold- The Beginning
Harold Edward Ford Jr. was the First of...

Send flowers to the Ford, family.