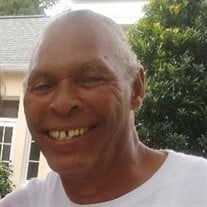 Gregory Lionel Drakes was born September 5, 1955, and grew up in historic Eatonville, Florida with his mother, Jennie V. and three older brothers. He was a member of St. Lawrence African Methodist Episcopal Church, Eatonville, FL. Greg graduated from Edgewater High School in 1974 and worked in the construction and electrical industries for many years before becoming a licensed Security Guard. He worked for Universal Allied Security from 2009 until his demise. Greg loved jazz and country music, fishing, beachgoing and anything outdoors. He was a jack of all trades and knew how to fix anything from cars, to electrical and plumbing. He loved to build things and especially loved gardening. Greg was preceded in death by his brothers: Henry Drakes, Jr., Ernest Drakes and Malone Drakes, Sr.; his beloved Aunt Annie Lue Davis; and his Mother, Jennie V. Drakes. He is survived by his loving daughters, Latoya Magill (Noah), Jene Foster and his granddaughter, Joi Plummer. Greg maintained a very special bond with his Sister-in-law, Bonnie Drakes and her children: Malone Drakes, Jr. (Donna), Eric Drakes, and Lucinda Butler (Ahmad). He also shared a loving bond and life-long friendship with his cousin, Elvira Scurry McBurnie. Greg leaves his companion, Anita Caldwell to morn his passing, along with her children Hezzakyah Caldwell, I; Hynryetta Caldwell and her grandchildren: Hezzakyah II, Zion, Jeremiah and Jeriah. Greg leaves a host of cousins, nieces, nephews, high school classmates, coworkers and many friends he made to remember and celebrate his life, who will all miss him dearly. He knew no strangers and was loved by many. May his soul rest in eternal peace.

The family of Gregory Lionel Drakes created this Life Tributes page to make it easy to share your memories.

Send flowers to the Drakes family.