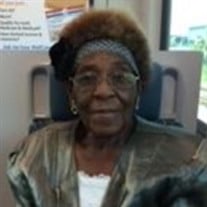 Greenia Smith Campbell (AKA Greenia Mae Jones) was born on December 27, 1938 in Clio, Alabama to Orie Mae and Lovie Smith, Sr. She attended school at Clio Public High School where she met her future husband, Willie James Jones (our father). They brought four children into the world. In 1963 she met her second husband, James (Bish) Campbell and they moved and permanently settled the family in Orlando, Florida. Mom made sure we did not forget about our extended family in Alabama We traveled back there every Christmas Holiday and spent many summers with both sets of grandparents while growing up. In Central Florida, we lived in various area of the Orlando’s black communities (Callahan, Orange Center Boulevard and Washington Shores). Mom was employed and held various jobs during her career. For her, landing a job at Walt Disney World in the early 1970’s was a proud moment and accomplishment. She worked at Tony’s Town Square Restaurant on Main Street for 17 years as a service line cook before taking early retirement. Retirement did not last long, she decided to go back to work at Universal Studios as a line cook and spent nine years before retiring again. She enjoyed gatherings and cooking for our families every Sunday and during special holidays. We got to enjoy some of the fancy decoration techniques she had learned and tried foods that we were not used to eating (i.e. duck). We have fond memories of her preparing our favorite foods and sharing time laughing and talking about family together. Her last years were spent living at the Covenant on the Lakes Senior Apartments on South Rio Grande. She enjoyed living there and participating in the various activities (Bingo Friday, Ice Cream Socials, etc.) We learned over time that mom had a side hustle and for a small fee would drive her neighbors to their doctors appointments, grocery store, restaurants, etc. A special thanks to the neighbors who would check on her and would stop me to ask about her health before she moved in with me in 2020. She attended St. John Baptist Church before getting sick in 2016. My brothers and I gave her many flowers during her lifetime and will cherish the memories as we look forward. Greenia was preceded in death by her parents, Orie Mae and Lovie Smith, Sr.; one son: Tommy Ray Jones; sister: Eunice Fox; brothers: William Smith and Lovie Smith, Jr. She leaves to cherish precious memories to children: sons, Tony Jones, Victor Jones, both of Orlando, Florida and daughter: Margaret Coleman of Orlando, Florida; 8 grandchildren; 11 great grandchildren; a host of nieces, nephews, cousins other relatives and sorrowing friend.

The family of Greenia Mae Campbell created this Life Tributes page to make it easy to share your memories.

Send flowers to the Campbell family.