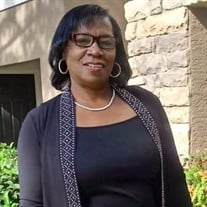 Lady Grace C. Roberts “A Woman of Faith, Purpose, Vision and Call” Our dear and precious sister, Lady Grace Roberts, stepped into Heaven on September 24, 2021 and is now with her Lord and Savior. Without a doubt, she is in the arms of Jesus and was welcomed by all of Heaven as she heard her Heavenly Father say, “Well done, thou good and faithful servant.” Lady Grace and her husband, Minister Ken are members of our New Beginnings Church family and she will be greatly missed. She was very special, caring and affectionate woman of God. Everywhere she went, the lives she touched were ultimately transformed for the good. On May 14, 1960, in Andros, Bahamas, God in his infinite wisdom chose to bless a beautiful couple. Charles & Mable Bastian, with twin girls, Ruth and Grace. While attending High School, Grace accepted the Lord Jesus Christ as her personal Savior. Later on Grace and Ruth both moved to Nassau, Bahamas, seeking better opportunities. She was then employed by the Bahamas Government as a Lab-Technician with the Department of Environmental Health. While working there, she met Mr. Kenny Roberts, whom she fell in love with and soon they became husband and wife. Grace also launched her own successful business by the name of Grace Meat Mart. She had such a love for people and her church. She represented her name well. In 2011, Minister Ken & Lady Grace relocated to the United States from the Bahamas and eventually made Orlando, Florida their home. Lady Grace is survived by her husband, Minister Ken, four sons (Dario Campbell, Kenzo Roberts, Kenneth Whymns, Kendrick Roberts), two daughters (Leticia Bastian, Kenva Roberts), and 13 grandchildren. Most of all, Lady Grace is a born-again Christian. She brought many people to Christ during her lifetime. It is with great confidence that we know she now resides in Heaven today! Lady Grace will be greatly missed by all. But, for those who believe in Jesus, death is not an ending, but rather a beginning. It is not defeat, but victory! “For me to live is Christ, and to die is gain.”

Lady Grace C. Roberts &#8220;A Woman of Faith, Purpose, Vision and Call&#8221; Our dear and precious sister, Lady Grace Roberts, stepped into Heaven on September 24, 2021 and is now with her Lord and Savior. Without a doubt, she is in the arms... View Obituary & Service Information

The family of Grace C. Roberts created this Life Tributes page to make it easy to share your memories.

Send flowers to the Roberts family.