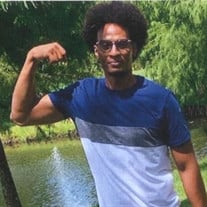 SUNRISE Gerry Isaiah Newsome was born on November 21, 1983 from a union of Jerry Newsome and Lorretta Parker Newsome (Butler) in Newark, New Jersey. Education Gerry was educated through the Orange County public system, he was a great basketball player and graduated from University High School in Orlando, Florida, Gerry also obtained his CDL License. Career Gerry worked for Newark, NJ airport after graduating from high school, later returning to Orlando, FL to become a truck driver, then on to work for Publix Supermarket until his transit of life. Gerry was known to be a hard and exceptional employee by his co-workers and employers. Family Gerry loved his family very much, he was a good son, a loving brother, a great role-model and mentor to his nieces and nephews and a host of cousins. Although he didn’t have any children of his own, he was a father figure to many. Although he had a special relationship with all of his cousins Ira Parker and Laquan Crosby were like brothers to him and shared a special bond. Faith Gerry was a faith believer of the Kingdom of God and his Lord Jesus Christ. People said his presence and smile brought them peace, and that he had a pure soul, that is how he represented the love of his Savior. He was a gentle warrior. Favorite Gerry loved music, singing, Karaoke, dancing basketball, and working out and spending time with his family and friends. SUNSET Gerry said goodbye to this world in Sanford, FL and joined his ancestors in God’s Kingdom at 12:00pm on Thursday, September 17, 2020 with his family and friends by his bedside. He leaves behind: his mother Lorretta Parker- Butler, his step-father William Butler, his grandmother, Lucille Newsome of Newark, NJ; his siblings; his twin-brother Gary Newsome of Port Saint Lucie, Florida, his eldest sister Lorraine Newsome-Carwell and her husband Jerald, baby brother Derrick Newsome of Orlando, Florida, Montrell Bond and Shahidah Blue of Newark, NJ; Aunts; Deanna Smith(Leonard), Yolanda Parker-Jackson Darlene McBride (George) Louise, Jamilya (Buthie); uncles; James Parker(Chris),Glenn Parker, Roland Parker, Allen Parker,Gregory Armstrong, a host of nieces and nephews, cousins, and friends. His father Gerry Newsome, grandmother Deotha Parker-Jackson, aunt Ava Parker, and uncle Leroy Parker preceded him in death.

SUNRISE Gerry Isaiah Newsome was born on November 21, 1983 from a union of Jerry Newsome and Lorretta Parker Newsome (Butler) in Newark, New Jersey. Education Gerry was educated through the Orange County public system, he was a great basketball... View Obituary & Service Information

The family of Gerry Isaiah Newsome created this Life Tributes page to make it easy to share your memories.

Send flowers to the Newsome family.