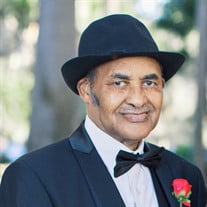 To view the service for Gerald Martin Powell's live stream please use the link below: https://youtube.com/channel/UCLLNJxgAMZUt_njHZdNID7A Gerald Martin Powell was born on May 3, 1943 to Gilbert and Demetrius Powell, in George’s Valley Manchester, Jamaica. He attended George's Valley All Age School and later Upholstery Trade School. On successfully completing training, he took a position as a furniture upholsterer as a means of supporting his family, which by then included a son Ricky and a daughter Petronia, and later another son RoxRoy. He immigrated to the United States in 1980 and settled in Connecticut. He later moved to Boston, Massachusetts, where he lived with The Francis family, his cousins. Brother Powell, as he was affectionately called by family and friends, started attending the Berea Seventh-day Adventist (SDA) church, where he met his lovely wife Joyce Genus. They both said it was “love at first sight” and on October 7th, 1984 they were married at Boston Temple SDA. In 1985 their first daughter Anne Marie, was born, and in 1987 they were again blessed with another beautiful baby girl, Stacey. The Powell’s began attending the Cambridge Seventh-day Adventist Church where Brother Powell held many prominent positions, including elder. He was instrumental in helping the Cambridge body of worshippers secure their first church building. In 1999 the Powell family joined Roxbury Mission, which was renamed The Waymark SDA in 2007 and there, continued to worship and faithfully serve, until leaving Massachusetts for retirement, in Florida, in 2016. Bro. P has a God-given gift, no doubt, which he in turn used to the glory of God. He would invite many families to the Seventh-Day Adventist church to have their babies dedicated. He also brought family members to a knowledge of Christ, even to the point of baptism, as the family reminisced recently; “If it was not for Bro P, I would not have come to know the truth in the Bible”. Prior to leaving for Florida, Brother Powell also volunteered as custodian for the church, another act of selflessness. And, as his final vocation in Massachusetts he transported the children to and from the Tender Heart Day Care. In Florida, the Powell’s became members of Patmos Chapel. Best described as a dedicated Servant of God, here was a man who met the challenge of each position to which he was called, with equal amount of commitment and devotion. It was his love of God, and for man, that was evident in his words and actions. As Elder, he demonstrated that he had a keen knowledge of the doctrines of the church, as Deacon, he was delighted to assist others as Pathfinder Director, he provided responsible leadership to the youth. In fact, a family of four young adults who became Pathfinders under his tutelage, expressed profound sadness at his passing, such is his lasting influence. Always with a smile on his face, Brother Powell was able to strike a unique balance between the seriousness of his many church positions and the need to make others laugh. He did not miss an opportunity to tell a joke, even if the joke was on him. Who can forget his colorful children’s stories, but moreover, who can forget the look of deep interest on the children’s faces as he told the stories of his days growing up in Jamaica, complete with props and actions? He played a number of different instruments and all were self- taught. He could often be found alone in the sanctuary practicing for an upcoming concert, where his guitar or mouth organ renditions would be one of the most anticipated performances of the event. Anyone who knew Brother Powell in his youth, would describe him as fearless. Had it not been for the mercy of God, Brother Powell may not have even made it to the United States. As a young child, he fell into a hole and was in danger of suffocating before he was plucked to safety. There was also the time he fell head first into a tank of water and was in danger of drowning before he was gallantly rescued. As a young man, he apparently was hit by cars a number of times, as he maneuvered through the busy streets of Jamaica on his bicycle. The word that one would use to describe him as an adult was industrious – he taught himself to play the many instruments that he played and at one point, he offered to teach others as well. He was good at farming, painting, photography, videography, tailoring and even tried and successfully mastered crocheting. Everyone who ever met and knew Brother Powell will miss this soft-spoken ambassador for God. His wife Joyce Powell will miss a loving husband, his sisters Lucille Ferguson, Olive Mae Blake, Geneva Nosworthy and brother, James Powell, will miss their supportive sibling. His children, Claudette Daley, Eric Powell, Marcia Foster-Bennett, Petronia Powell, Roxroy Powell, Vaughna Genus, Andrea Williams, Anne Marie Sinclair and Stacey Powell will miss their dearest dad. His 16 grandchildren, 3 great-grands, nieces, nephews, cousins and numerous friends will miss his jovial presence. His church family will miss the man they called Elder Powell, for the example he set and the life he lived. Death may have separated us from the God of life for a while, but we know that Jesus defeated death. If we are faithful, we will see Elder Powell again and so today we look forward to the resurrection and to living together forever so, come Lord Jesus. Amen

To view the service for Gerald Martin Powell's live stream please use the link below: https://youtube.com/channel/UCLLNJxgAMZUt_njHZdNID7A Gerald Martin Powell was born on May 3, 1943 to Gilbert and Demetrius Powell, in George&#8217;s Valley... View Obituary & Service Information

The family of Gerald Martin Powell created this Life Tributes page to make it easy to share your memories.

Send flowers to the Powell family.