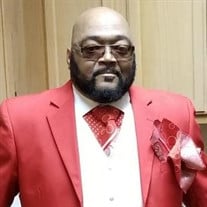 To view the service for Sgt. Garry Anthony Sharpe's live stream please use the link below: www.facebook.com/ZandersFuneralLIVE “A Godly Man, not just in sickness, but in all that he lived for and accomplished in his life.” Sergeant Garry A. Sharpe was born in Orlando, Florida on February 4th, 1964, to Daniel Sr. and Willie Belle Sharpe. He was raised with 5 siblings, which he loved with all his heart: Toney, Jannie, Daniel Jr., Joshua and Chauncey all of Orlando, Florida. He grew up with the mentality of work hard, play harder. He worked with his father Daniel, picking oranges and apples in the fields from Florida to Rochester, New York. He is the proud father of his son, Devin Finnerman and daughter, Ebonye Jackson Sharpe and an honorable husband to Mrs. Mia Sharpe, which he adored because she not only loved him dearly she cared for his daily needs with a passion. Sergeant Garry went right in to Army boot camp within 2 weeks of graduating from High School, he spent 18 years active duty and 13 years as a Federal Employee for TSA Airport Security. He was an Honorable Army Sergeant that dedicated his life to serving his country in the Gulf War on the frontlines to the enemy as well as being a Proud Army Chef, whereas he not only fought with his fellow soldiers he fed them as well. He traveled around the world but would always call and say I’m on my way home Sis, can I crash at your crib? The answer was always a yes. Sergeant Garry Sharpe attended the local public schools from Kindergarten to 2nd grade at Richmond Heights Elementary, then was transferred to Eccleston Elementary to 3rd grade and Sadler Elementary 4th to 6th grade. He then attended Robinswood Junior High. He graduated from Oak Ridge High School in 1982. Garry loved sports and he participated in football and track in high school. But he loved basketball the most, although he never played in school he was known around town as the man that had the fastest direction change in dribbling, you would ever see and he did that with just his right hand. So you know who you are that felt some of that. Sergeant Garry Sharpe suffered from chemical burns on his lungs for the past 15 years, which he received during military warfare. Although he became disabled he still continued to live a fulfilling life with his family, contributed and shared his faith and love of God with people around the world every day he had the strength to do so. He shall be honored and remembered forever with love, happiness, joy, forgiveness and fill your hearts knowing he is at peace. He was preceded in death by his mother, Willie Belle Sharpe and daughter, Ebonye Jackson Sharpe. Sergeant Garry Anthony Sharpe leaves to cherish precious memories to his wife: Mia Sharpe of Orlando, Florida; father: Daniel Sharpe Sr. of Orlando, Florida; children: Devin C. Finnerman of Altamonte Springs, Florida; stepdaughters: Quanisha Johnson of Miami, Florida, Faith Hosea and Jasmine Johnson, both of Orlando, Florida, KeyAnta Wright of Indiana and stepson: Kourtney Busby, of Orlando, Florida; siblings: Toney A. Sharpe, Sr. (Alicia) of Sorrento, Florida, Jannie Sharpe Sands (Ronald), Daniel Sharpe, Jr. (Kayone), Joshua Sharpe, Sr. (Tasha) and Chauncey Sharpe (Michael) all of Orlando, Florida; seven grandchildren; a host of aunts, uncles nieces, nephews cousins other loving relatives and friends.

To view the service for Sgt. Garry Anthony Sharpe's live stream please use the link below: www.facebook.com/ZandersFuneralLIVE &#8220;A Godly Man, not just in sickness, but in all that he lived for and accomplished in his life.&#8221; Sergeant... View Obituary & Service Information

The family of Garry Anthony Sharpe created this Life Tributes page to make it easy to share your memories.

Send flowers to the Sharpe family.