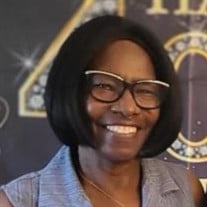 Gale Wancia Edwards was born on October 12, 1953, Ocala, Florida to the late Winan Edwards and Mary Elizabeth Jackson Emmanuel. Gale spent her formative years with her grandparents, Mrs. Cardia N. Grimes Jackson and Edward Jackson; Aunt and Uncle, Rosa Lee and Daniel Jackson, all preceding her in death. Also preceding her in death; brothers; Travis, Gregory, Reggie and Frank, Jr. Gale attended Marion County High School and upon graduation went to pursue a lifelong career in Criminal Justice, he followed that path to Brevard County, where she transported inmates for the county. She decided in the late 80's to make Kissimmee, Florida home for her and her son Walter. Thus, her career path continues with the Osceola County Jail until retirement. After a short time of resting, she decided to pick up some light work, thus she went to work for Securitas until her passing. Many have shared heartfelt stories as to the role Gale played in each of their lives and all agreed that there was nothing, she would not do for you when you needed her. She joined Friendship Missionary Baptist Church in 1997 under the leadership of Pastor Harold Stallworth, Sr. Gale worked for God and took her position as a leader very seriously. For over 25 years she was the face as the door to greet and welcome you into the house of the Lord. She was the church treasurer and wherever else she was needed. She leaves to cherish per memories: Son: Walter Smith (Regina) New Bern, N.C. Grandchildren: Porsha Smith of Gainesville, FL; Gregory and Imari of New Bern, N.C; Brothers and Sisters: Brenda Emanuel, Ocala, Florida.; Leon Emanuel (Colleen), Kenneth Emanuel, all of Lansing, Michigan; Elaine Edwards, Jackie Edwards and Kenneth Edwards of Ocala, Florida; Great Uncle: William James (100 Years old); Great Aunt: Martha Nichols: Special Cousins: Dwanette Dilworth (Ronald) Thalia Harrell, Lucille Straughter, Gwendolyn Williams all of Ocala, FL.; Two nieces close to her: Monica Emanuel and Ronika Dilworth Gale loved her family and they loved her and whenever needed she never hesitated, and she will be truly missed by us all. Special Mentions: Nina Hill, Jackie Yon, Edith Fletcher, Kitty Simmons, Ronnie and Dorthea Hardee, Letha and Latoyia Stallworth, Daniel and Evelyn Patterson, Williemae Miley, Sheila Brown, Minnie Brown Good Neighbor: Dudley and Sama Ramkissoon Pastor Stallworth and the Friendship Missionary Baptist Church Family

The family of Gale Wancia Edwards created this Life Tributes page to make it easy to share your memories.

Send flowers to the Edwards family.