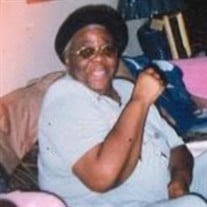 Flora Lee Jones was born August 28, 1938 to Sam and Louise Hill. The Lord in His infinite wisdom deemed it timely to call our beloved Flora to her eternal resting place on November 17, 2020. Her departure is a deep and personal loss to her family... View Obituary & Service Information

The family of Flora Lee Jones created this Life Tributes page to make it easy to share your memories.

Send flowers to the Jones family.