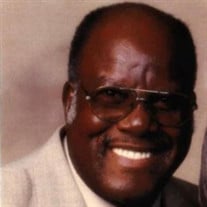 Fletcher B. Boone Jr., the son of the late Wesley Fitchua Boone and Josephine Smalls Boone, was born on October 13, 1933, in Summerville, South Carolina, where he lived until his relocation to Holly Hill, South Carolina. The Lord, in His infinite wisdom, deemed it timely to call our beloved Fletcher B. Boone Jr. to his eternal resting place on Monday, November 1, 2021. He was a member of Greater Mt. Carmel Missionary Baptist Church, where he remained a member until his transition. He served as a Trustee and Deacon for several decades and worked to assure that kingdom building occurred. He served his country through the United States Army, as a Specialist Fifth Class and was honorably discharged. He was raised to truly understand the importance of embracing and loving family and friends. That love was demonstrated daily as he was a dedicated, loving, and committed husband to his beautiful wife of 62 years; father and grandfather, where he instilled a love for self, others, and integrity; a brother, uncle, and friend that would always have your back. For Fletcher B. Boone Jr., his family was his pride and joy, and he cherished each moment he spent with them. As a husband and father, he knew the importance of being able to care for his family. His work ethic was amazing! He believed in always doing and giving his best at all times, which was demonstrated through his thirty-one years of work for Public Gas Company as a Propane Gas Delivery salesman. Descriptive terms of who he was as a worker include: hardworking, dependable, trustworthy, and determined. Characteristics that describe him as a husband, father, grandfather, uncle, brother, and friend are loving, kind, funny, steadfast, devoted, and protective. Fletcher B. Boone Jr. leaves his cherished precious Wife of 62 years, Rosetta E. Nix Boone of Eustis, FL; Daughter, Katrina J. Boone of Tallahassee, FL; Son, Fletcher B. Boone III (Katrina H.) of Apopka, FL; Daughter, Sharon Ross- Donaldson (Bobby) of Tallahassee, FL; Brother, George Oliver (Mary) of Greelyville, SC; Grandsons: Wesley Fletcher Eliga Boone I and Robert Ross Donaldson, both of Tallahassee, FL, Sisters-in-law: Bernice A. Hayes (late Galloway Hayes) of Eustis, FL, and Gladys L. Swinton (William) of Eustis, FL; Best Friend, Samuel (Monk) Ritter; Godchildren: Casey D. Johnson, Craig Patrick Riley Jr., Kristen Dixon, and Christa P. Clark; and many loving devoted nieces, nephews, cousins, and friends.

Fletcher B. Boone Jr., the son of the late Wesley Fitchua Boone and Josephine Smalls Boone, was born on October 13, 1933, in Summerville, South Carolina, where he lived until his relocation to Holly Hill, South Carolina. The Lord, in His infinite... View Obituary & Service Information

The family of Deacon Fletcher B. Boone, Jr. created this Life Tributes page to make it easy to share your memories.

Fletcher B. Boone Jr., the son of the late Wesley Fitchua Boone...

Send flowers to the Boone, family.