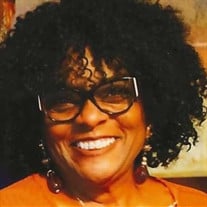 Fern Yolanda Boone was born in Sanford, Florida on March 22nd, 1955, the first child of the late Bishop Herman A. and Fayetta V. Wilcox. Later she would become the eldest of six children. Fern started her educational journey in Rochester, New York. Later she and her family moved to South Florida, where she met the love of her life, Samuel Derrick Boone, at Carol City Senior High School. Little did she know he would one day become her best friend, husband of 47 years, and the father of her four children, Latrisa, Samuel Jr., April, and William. Fern was an advocate for everyone to always be the best at utilizing the gifts that God had given them. She pursued a career path that led her to the Veterans Administration Office for 3 years and ultimately, to the US Attorney’s Office where she retired after over 20 years. In 1976, Fern accepted Jesus Christ as her Lord and Savior and became a faithful member of Refuge Church of Our Lord Jesus Christ, under the Leadership of Elder Norman Reaves. Fern had a love for music and went on to become a well known choir director in her church district. In 1985, by the leading of the Lord, she and her husband transferred their membership to help her late father’s ministry, Liberty United. While serving faithfully, her husband accepted the call to become an Elder and was then installed as Pastor of Liberty United Worship Center (LUW). Because of her unique sense of style, and no-nonsense attitude, Fern became known as “The Stylish and Realest First Lady.” As a mother, she believed in making sure her kids knew the power of prayer. She always put God first and used the Bible as her template to raise her kids. She also served as the Mother of the Church and Pastor’s Assistant. Fern Yolanda Boone will be remembered as a woman of integrity, Accountability, fierceness, sass, never to be defined, and always unpredictable. She was a class act and a hard act to follow. Fern was a loving mother and best friend to all of her children, a devoted wife, a wonderful grandmother, and a faithful sister and friend. She loved God and would do whatever it took to please him. She will forever be missed and loved by all!! She leaves to continue her legacy, her husband, Samuel D. Boone, Sr., daughters: Latrisa (Corhei) Lanier, April Boone, and Maria Jenkins; sons: Samuel D. Boone, Jr. and William A. Boone; 16 grandchildren, 5 sisters and 1 brother, and a host of aunts, uncles, in-laws, and Liberty United Worship Center Family

Fern Yolanda Boone was born in Sanford, Florida on March 22nd, 1955, the first child of the late Bishop Herman A. and Fayetta V. Wilcox. Later she would become the eldest of six children. Fern started her educational journey in Rochester, New... View Obituary & Service Information

The family of Fern Yolanda Boone created this Life Tributes page to make it easy to share your memories.

Send flowers to the Boone family.