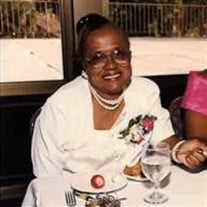 Ernestine S. Williams James was born October 8, 1932 to parents, Arthur and Nona Williams in Clarcona, Florida. She was the second child born to their union. Ernestine grew up in the Clarcona/Apopka area and attended Public Schools of Orange County and later went to Hungerford High School in Eatonville, Florida. At an early age she developed a love for travel and traveled throughout the United States meeting many people. She was married to William F. James in 1965. Ernestine was employed in various industries such as the General Electric Company, Care Giver and Horticulture. Ernestine spent her retirement years working with Senior Citizens and developed an overwhelming love for the Gospel of Jesus Christ. She desired to serve her calling, attending churches throughout the community as often as she could. She often had prayer service in her home and on her famous front porch where she was eager to tell any and every one about the goodness of the Lord. She was generous to people in need often giving food, clothing, money and furniture from her home. A while back, Ernestine’s health began to fail and after many years of health struggles, God called her home to rest and be at peace. Ernestine was preceded in death by her Parents: Arthur L. Williams and Nona R. Williams; Daughter, Arlaidy Linda Yarbough, Son, Willie James; Grandson, Brandon J. Williams; and Great Grandson, Debrand Blair. She leaves to mourn and cherish her colorful memories…Son, Aubey Cooper (Linda); Daughter, Cynthia Williams Hartsfield; 10 grandchildren: Wallace L. Henderson, Jr., Shameika M. Smith, Amber T. Williams, Kimbia M. Yarbough, Allen L. Murphy, Natasha Lee, Norris Mott, Darrell Cooper, Bernard Cooper and Mark Cooper; long time and very close Cousin, Arneta Williams; 23 Great Grandchildren; 8 Great-Great Grandchildren; and many cousins, other loving relatives and friends.

Ernestine S. Williams James was born October 8, 1932 to parents, Arthur and Nona Williams in Clarcona, Florida. She was the second child born to their union. Ernestine grew up in the Clarcona/Apopka area and attended Public Schools of Orange... View Obituary & Service Information

The family of Ernestine S. James created this Life Tributes page to make it easy to share your memories.

Send flowers to the James family.