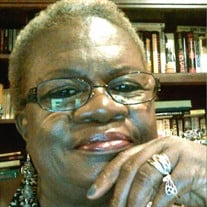 Ernestine R. Hunter was born April 24, 1948 in Auburn, Alabama to parents James Allen, Sr. and Nancy Lee Reaves. She attended Orange County Public Schools. Ernestine met Cecil L. Hunter and the two married on June 24, 1966. To their union three children were born. She worked at Sunland for many years before its closing in 1983. After leaving Sunland, she went to work at the Orange County Health Department as an aide. She was later certified as a phlebotomist and retired in the early 2000’s. Her job after retirement was being a mom to her adult children and the world’s most awesome grandmother to her grandchildren!!! Ernestine’s husband Cecil passed away in 2004. She later met Mr. Richard Bonnell. He gave her her smile back and changed her outlook on life in so many ways. Together they were great. They complimented each other. He was a blessing in her life. Ernestine was preceded in death by her Husband, Cecil Lee Hunter; Father, James Allen, Sr; mother, Nancy Lee Simmons; Brother, Joe Allen; and Sister, Rosemary Torbert. Left to cherish her memory…Children: Tracy Merchant (Freddie) of Leesburg, Florida, Cecil L. Hunter, Jr. of Apopka, Florida and Tamara Hunter of Apopka, Florida; Siblings: James Allen, Jr. (Brenda) of New Orleans, Louisiana, Fancy Kay Allen of Auburn, Alabama, Carolyn Cook of Apopka, Florida, Gregory Simmons of Apopka, Florida and Mary Simmons of Apopka, Florida; Grandchildren: Ashley Wilson-Hutson, Cardae Hunter, Michael Chester, Jr., Freddie Merchant, Jr., Tayla Lewis, Rain Hunter and Madisyn Merchant; 6 Great Grandchildren; and a host of other loving relatives and friends.

The family of Ernestine R. Hunter created this Life Tributes page to make it easy to share your memories.

Send flowers to the Hunter family.