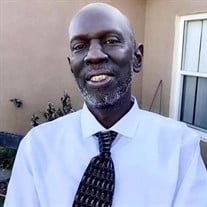 Ernest was born on July 21st, 1959 in Clermont, Florida. He was the 5th child to the late Isaiah and Bernice Hodges. Ernest had many aliases/nicknames over the years. Most called him by his middle name Clint. Some referred to him as Jason, Jake or even Hollywood. He most recently acquired the name Eastwood, a reference to the Hollywood actor Clint Eastwood. This name seems to be the most fitting because Clint’s mild mannered demeanor was so cool, calm and collected..which was reflective of the actor. Clint grew up in Stuckey where he played on the railroad tracks and worked on the farm with his mom & dad. He graduated Groveland High School and later went on to receive his CDLs. Clint spent many years driving trucks for various companies. He eventually moved to Miami, Florida and would often tell the story of his survival of Hurricane Andrew in 1992. Clint’s love for the country eventually brought him back to Stuckey. This allowed him the freedom to cultivate his true passion for farming, landscaping, and building what we would call “Clint’s Gadgets”. He would bring a piece of ‘junk’ to life with his creativity. Anytime Clint is around, you always know God's green Earth is in good hands. He quietly, humbly, and skillfully takes care of green spaces that start as blank canvasses. He always knows what needs to be done to turn a rough patch of grass into a scene ready for a photoshoot or a space to sit down and relax. Clint shows his love for those around him by checking on them in his own way. One of his ways of showing you that you’re on his mind is by doing handy work for you. Also, you know Clint loves you when he cracks a joke on you...right to your face. Who can make fun of you AND have you laughing at yourself?! Only Clint. Clint was diagnosed with Cancer in 2015. The oncologist did not have a great prognosis and said it was a very rare and aggressive form. He did not think Clint would survive more than a year. We are so THANKFUL that God blessed us with almost 6 years of memories that we will forever cherish. Clint would often get Chemo treatment and come home and hop on his lawn mower. Most did not even realize the fight he was up against every day. He made it look so easy! During his last years, Clint was able to visit many places on his bucket list. He traveled to the Bahamas, Georgia, Tennessee, Louisiana, and even Mississippi. He took his first cruise, hiked in the mountains of Georgia and Tennessee, and even went on a Swamp Tour through the Bayou of Louisiana. We will forever hold on to every memory we shared over his life. Ernest Clinton Hodges, Sr. passed away on January 18th in the comfort of his home in Stuckey, Florida. Speaking in present tense, forevermore: Clint, we love you. Clint, you are ever-present, and therefore can never be forgotten. He was preceded in death by his Father, Isaiah Hodges and Sister, Linda Jean Bowden. He leaves to cherish his precious memories…Son, Ernest C. Hodges, Jr.; Mother, Bernice Hodges; Sisters: Sheila Neal and Gail Hodges; Brother, Lonnie Hodges (Yolanda); Special Niece: Marlee Ferron and a host of so many special friends and family members left to mourn his departure.

Ernest was born on July 21st, 1959 in Clermont, Florida. He was the 5th child to the late Isaiah and Bernice Hodges. Ernest had many aliases/nicknames over the years. Most called him by his middle name Clint. Some referred to him as Jason, Jake... View Obituary & Service Information

The family of Ernest Clinton Hodges, Sr. created this Life Tributes page to make it easy to share your memories.

Send flowers to the Hodges, family.