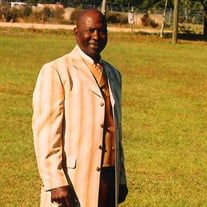 On January 10, 1946 in Dolton, Alabama, our almighty God blessed Marvin and Inell Williams with a mighty warrior, Jimmy Williams; a unique baby that would become one of God’s anointed preachers. Young Jimmy was educated in the public schools of Apopka, Florida. He was an entrepreneur by trade and a servant at heart. He was a man of all trades and quite the master of many. Whether large or small, there wasn’t a task assigned to him that he wouldn’t tackle. He endeavored to be successful in both word and deed. One of his greatest successes that turned to treasure happened over 48 years ago, when he met and then married the love of his life, Florine Solomon. When he made her Mrs. Florine Williams, the woman of his life, he knew they were destined to walk together side by side. They did just that in life and ministry! When he began his religious journey, he remained dedicated to Jesus and served the home, the church, the community, and the state faithfully. Elder Williams would always say, “Tell the Lord Thank Ya!” and meant it. As he unapologetically taught evangelism, Elder Williams realized that Great is God’s faithfulness. God began to work more and more in his life and proved him to be a true son and leader. He soon became Pastor Jimmy Williams of Faith Outreach Ministries II in Wildwood, FL. From there, things could only excel. His dedication to God and ministry then afforded him the opportunity to be elevated as the State Elder for the Florida Gulf Diocese, under the leadership of Apostle Carlton Williams, Ph.D. of Orlando Florida. Elder Williams unselfishly dedicated himself to a life of praying, praising, teaching, preaching, encouraging, building, restoring, giving, sharing, laughing, and loving. There was no doubt that he had an extreme love for God, family, and ministry. He was a Mighty Man of Valour! Elder Williams truly fulfilled the great commission, “Go ye therefore, and teach all nations, baptizing them in the name of the Father, and of the Son, and of the Holy Ghost:” Matthew 28:19. Elder Jimmy Williams, a man of God truly Called, Chosen, and Sent according to God’s promises and faithfulness. A warrior was called from labor to reward on Wednesday, July 7, 2021. “GREAT IS GOD’S FAITHFULNESS” Called: “Wherefore the rather, brethren, give diligence to make your calling and election sure: for if ye do these things, ye shall never fall: For so an entrance shall be ministered unto you abundantly into the everlasting kingdom of our Lord and Saviour Jesus Christ.” 2 Peter 1:10-11 Chosen: “ But when it pleased God, who separated me from my mother's womb, and called me by his grace, To reveal his Son in me, that I might preach him among the heathen; immediately I conferred not with flesh and blood:” Galatians 1:15-16 Sent: “I in them and You in Me, that they may be perfected in unity, so that the world may know that You sent Me, and loved them, even as You have loved Me.” ~John 17:23 He was preceded in death by his parents, Marvin and Inell Williams; brother, Johnny Williams; Sisters, Betty Rahming and Rose Reynolds; brother- in- law, Cecil Solomon. Here to honor and cherish his memory is his Wife, Lady Florine Williams, Children: Terrence Williams Sr. (Nora); Carshoma Williams; Comatasha Foster (Deacon Kelvin); Keith Williams (Erica); Brothers: Marvin Williams Jr., Bobby Williams (Louvonne), David Williams, Apostle Carlton Williams, Ph.D. (Caroline), Elder Dr. Charles Williams (Clara), Ricky Williams, Theodore Williams (Velma), Michael Williams, and Preston Williams; Sisters: Willie Dean Williams, Lillie Hughley, Carolyn Williams, and Darlene Hills (James); Grandchildren: Jerald, Jacarria, Tae, Terrence Jr., Terrance W. Kavonda, Terrence G., Emonee’, Derek and Kiara; Brothers-in-law: Telly Solomon, John Solomon Jr., and Roosevelt Morgan; Sisters- in- law: Pal Morgan, Althea Johnson, and Kathy Solomon; God-Daughter, Tiffany Massey; God-Son, Curtis Lyons Jr., and a host of great grandchildren, nephews, nieces, cousins, many sorrowing relatives, friends', and members of Faith Outreach Ministries II.

On January 10, 1946 in Dolton, Alabama, our almighty God blessed Marvin and Inell Williams with a mighty warrior, Jimmy Williams; a unique baby that would become one of God&#8217;s anointed preachers. Young Jimmy was educated in the public schools... View Obituary & Service Information

The family of State Elder Jimmy Lee Williams created this Life Tributes page to make it easy to share your memories.

Send flowers to the Williams family.