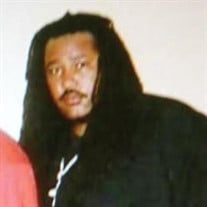 Edward Charles Watson, Jr., known to family and friends as “Man” was a devoted son and father who was born on October 31, 1979 in Meridian, Mississippi to Edward Charles Watson, Sr. and Mary Watson. As a child, Edward was a caring son and brother. As an adult, he was a loving father. Edward joined Mt. Olive African Methodist Episcopal church as an adolescent and became a member of the Choir and Usher Board. After graduating from Eustis High School, he developed a passion for the culinary field and became a chef mesmerizing many with his creative food delights. In 2002, Edward was blessed with a son, Edward Jerome Watson, whom he adored and loved throughout his life. Edward was preceded in death by his father, Edward Charles Watson,Sr. Edward was summoned by God on September 7, 2021 at 6:15p.m. without delay, he answered the call to return from where he came. He humbly stepped beyond the veil to enter into his eternal rest. He leaves to cherish his life and memories…his Son, Edward Jerome Watson of Tavares, Florida; Mother, Mary Watson of Eustis, Florida; Brothers: Julius Reynolds (Marie) of Chicago, Illinois and Carlos Watson (Gen) of Tavares, Florida; Sister, Lonnieka (Bruce) of Palm Coast, Florida; and a host of nieces, nephews, uncles, aunts, cousins and friends.

The family of Edward Charles Watson, Jr. created this Life Tributes page to make it easy to share your memories.

Send flowers to the Watson, family.