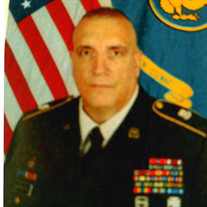 Master Sergeant Edward David Burkett was born February 5, 1962 in Cleveland, Ohio to Edward Burkett and Mary L. Burkett. He graduated from Morristown East School in Morristown, Tennessee. Master Sergeant Edward David Burkett was a true soldier in many forms. A loving compassionate son, caring for his parents and always giving them joy. He faithfully served his country for 29 years in the United States Army. There he met his beloved wife, Jewel. They were blessed with a beautiful baby girl, Brianna. After his military retirement as a Master Sergeant, they settled in Groveland, Florida for seven years. He displayed to all of us the true meaning of a soldier and warrior, in the midst of a terrible storm. He battled and fought his illness with courage and strength. He was an inspiration to all who knew him because of that courage, fighting spirit and integrity. Master Sergeant Edward David Burkett truly knew that God created him. The Lord Jesus made a way, sustained him and the Holy Spirit directed and comforted him. Thank you Lord Jesus for Ed’s beautiful life. He now resides in Heaven with his Heavenly Father and rejoices to see his earthly father, Edward. Master Sergeant Edward David Burkett was preceded in deathby his father, Edward Burkett. He leaves to cherish precious memories to his spouse: Jewel G. Burkett of Groveland, Florida; mother: Mary L. Burkett of Greenville, South Carolina; son: Jimmy R. Burkett of Pensacola Florida; daughter: Brianna A. Burkett of Groveland, Florida; brothers: Bruce B. Burkett of Morganton, North Carolina and Larry L. Burkett of Florence, South Carolina; sisters: Laura J. Hawley of Lansdale, Pennsylvania and Kristen L. Duffin of Greenville, South Carolina; two grandchildren; a host of aunts, uncles, nieces, nephews, cousins, other relatives and sorrowing friends.

The family of Edward David Burkett created this Life Tributes page to make it easy to share your memories.

Send flowers to the Burkett family.