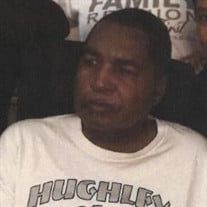 Executive Order in response to the COVID-19 Pandemic...we will only allow 10 individuals in at a time to enter the funeral home/cemetery. We must adhere to these guidelines so that we all can remain safe and secure during this crisis. Thank you for your understanding and cooperation Eddie was the oldest of 5 sons born to the union of Eddie Hughley, Sr., and Bernice Hughley on March 17, 1950 in Tuskegee, Alabama. The family relocated to Apopka in the late 50’s and became intricately involved in the community. He attended Phyllis Wheatley Elementary & Junior High School. He graduated from Phyllis Wheatley High School where he was an avid and gifted athlete in the fields of football, softball and baseball. As well as being “talented” he was dedicated and committed to the sports. His fame and notoriety with the Wheatley Panther’s Football Team led to his involvement with the community “Roscoe’s Hawks” and Johnny L. Griffin “Apopka Royals Baseball Teams. While there’s no record available in the “win/loss” category, there’s no dispute that they won more than they lost. Sports was his passion. As quiet and unassuming Eddie was, sports brought out his competitive spirit. He united with the Pleasant View Baptist Church at an early age under the pastorship of Reverend Zephaniah Turk. He was an active member. A faithful doorkeeper and served as the president of Usher Ministry No. 1 until failing health prevented him from performing. He was known and loved by many in the community and will be deeply missed. Eddie served his community for a brief period as an officer on the Apopka Police Force. After his time there he was employed as a truck driver for V.J. Growers Company until the business closed. He is preceded in death by his father, Eddie, Sr., and his twins, Brian and Dion. He leaves to cherish his memory, his adoring mother: Bernice Hughley; devoted brother and caregiver: Lorenzo Hughley of Apopka, Florida; Clifford Hughley (Jerene), Alton Hughley (Angela), and Kelvin Hughley; children: Evette Washington (Tristan) of Orlando, Florida; Tangela Martin-Bridges (Rodney) of Apopka, Florida, Antorie Hughley, Elisa Hughley of Apopka, Florida, Teresa Hughley of Orlando, Florida Akila Hughley of Apopka, Florida and Jatara Hughley-Safford (Terell) of Apopka, Florida; seventeen grands: three great grands: aunts: uncles: a host of nieces, nephews, cousins other relatives and many sorrowing friends.

The family of Eddie Hughley, Jr. created this Life Tributes page to make it easy to share your memories.