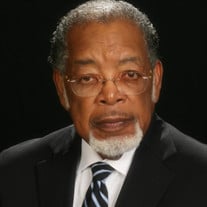 To view the service for Rev. Dr. William James Simmons live stream please use the link below: www.facebook.com/ZandersFuneralLIVE . A Time of Birth William James Simmons was born in Dooley County, Georgia on March 26, 1937, the only child of Lewis and Ida Mae Simmons. The family relocated to Orlando, Florida when William was three months old. A Time of Education William attended Holden Street Elementary School and graduated from Jones High School June 18, 1955. While working at Morrison’s Cafeteria, he received a music scholarship offer to attend college in Tennessee. William “Bill” attended Friendship Junior College in Rockhill, South Carolina where he became the first Student Body President. He graduated in 1957 and worked for one year before enrolling in Allen University in Colombia, South Carolina. He completed his Bachelor’s in Elementary Education and Music, and graduated Magna Cum Laude from Allen University in 1960. As a young man, he led “Sit-ins and Pray-ins” in South Carolina and Florida. The ministry of William Simmons began with an initial sermon preached in 1959 in Pineville, South Carolina under the pastorate of Reverend Nathaniel Burgess. A Time to Wed While at Allen University he met and married Kathryn Key. They relocated to Delray Beach, Florida. A Time of Matriculation Dr. Simmons’ professional teaching and administrative experiences are long and varied. He was an elementary school teacher, a college instructor, a recruiter and counselor for colleges and services such as, Upward Bound, high school principal, administrator of adult education program, instructor of sociology at the University of Florida. Eager to continue his education, he matriculated at Indiana University and the University of Florida, where in 1981 he became the first PH.D. Black graduate of the Sociology Department. Dr. Simmons was an Ambassador to the Nigerian Government, serving as the Culture Coordinator for Joint Venture Company between the U.S. and Nigeria. He learned to speak and write Swahili. In 1996 he became the first African American Administrator at St. Johns River Community College. He retired as College Provost at St. Johns River State College in 2011. A Time of Dedication and Devotion His calling to preach after his certification to teach led him to be ordained as an itinerant Elder in 1981in the African Methodist Episcopal Church, Central Florida Conference under Bishop Samuel S. Morris. In the 11th Episcopal District, Reverend Dr. Simmons has pastored: New Zion A.M.E.C.-Raleigh, Mt. Zion A.M.E.C.-Ocala, Allen Chapel A.M.E.C.-Williston, St. Paul A.M.E.C.-Winter Garden, and St. Andrew A.M.E.C.-Jacksonville Beach, where he retired in 2012 after 31 years of pastoring. A Time of Civic and Fraternal Involvement Reverend Dr. Simmons was much loved in cultural affairs at the University of Florida of Florida. He served as the Director of the Institute of Black Culture, serving on committees; Financial Aid, Intergroup Relations, UF Alumni Association and the Task Force of AIDS. He was responsible for presenting programs for Black History Month, Martin Luther King Jr’s Birthday, Tribute to Malcolm X, Black Americans Conference, Black Alumni Reunion and The Afro Arts Festival. Reverend Dr. Simmons service to society encompassed many areas besides his professional and educational contributions. He served as President of the Pleasant City Economic Development Cooperation of West Palm Beach County. He was a member of Florida American Association of Teachers, The African Studies Association and the Association for Study of Negro Life and History. His local organizations included the Salvation Army, and Beaches Emergency Assistance Ministry (BEAM). His honors included Who’s Who in American Colleges and Universities, Alpha Kappa Mu Honor Society, Danforth Fellow, and nomination in “Outstanding Young Men of America”. He was presently serving as President of Allen University Alumni Association, a member of Alpha Phi Alpha Fraternity, and the Orange Park Rotary Club. A Time of Departure After a period of illness, Dr. Simmons transitioned from life to life eternal on Wednesday, November 4, 2020 at Haven Hospice of Clay County. He was preceded in death by his parents, Mr. and Mrs. Lewis Simmons and in-laws, Reverend and Mrs. Randall Key. A Time of Acclamation His life was a blessed and exemplary one. He is survived by his loving wife, Kathryn Simmons; Son, Johnny Clark; Daughters: Lynn Almond, Valerie Simmons-McClain (Leon), Denise Simmons Depolis, and Rhani Simmons; Ten Grandchildren; Several Great Grandchildren; Sisters: Lucille Glover and Kathy Rogers; Brother, George Henderson; Aunts: Annie Pearl Holmes and Viola Burnam; Uncle: Abraham Simmons; Special friend, Benjamin Cain and numerous nieces, nephews, cousins and sorrowing friends. Reverend Dr. William Simmons has served the Church Militantly and has gone on to serve the Church Triumphantly. He declared, “Through the presentation of lectures, seminars, forums, class discussions, traveling exhibitions and numerous sermons, I have facilitated the education of students, members, congregations and communities about the History and Culture of Black Peoples of the World,” and I have proclaimed the gospel of Jesus Christ carrying out the motto; “God Our Father, Christ Our Redeemer, Holy Spirit Our Comforter, Humankind Our Family.”

The family of Rev. Dr. William James Simmons created this Life Tributes page to make it easy to share your memories.

Send flowers to the Simmons family.