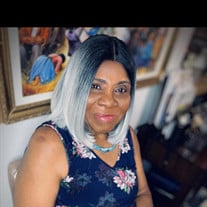 Dotsey Faye Dubose, affectionately called, “Mrs. Dotsey”, was born December 4, 1948 in Turbeville, South Carolina. She was one of six children born to Reverend Mary R. Hodges and Emmanuel P. Jones. She was educated in the Orange County Public Schools. She graduated from Westside Technical Institute in Winter Garden, Florida earning her certification in Medical Billing, and received recognition for her service as Historian for the Phi Beta Lamlida organization. She later became CEO of A&S Medical Supply in Winter Garden, Florida. Dotsey loved her family. She was a loving, strong and caring mom who was quite the disciplinarian of her wonderful children. Her faith played a significant role in her parenting, as she believed in rearing her children in the way they should go. She led them by example, as she exemplified righteous living. Dotsey accepted the call into ministry at an early age and began witnessing for the Lord. She really loved the Lord and gave her all to the ministry and the people of God. She worked tirelessly to better her church and community. In 1997, she embarked on her vision to partner with area ministers, churches, social service professionals, and community leaders. She began “Praises in the Park”, focusing on encouraging area youth and building a better, safer community. After the passing of her mother, Reverend Mary Hodge (Pastor and Founder of the Apopka House of Prayer) in 1998, she was promoted to the Pastorate. She continued the work for which her dear mother laid the foundation and assumed the role of Pastor of Apopka House of Prayer. She was serious about Kingdom building and winning souls for Christ. She would often say, “I’m not just building soldiers, I’m building warriors, who won’t back down or give in, but continue in the faith”. Pastor Dubose was faithful until the end and finished strong in the gospel of Jesus Christ. Pastor Dubose was preceded in death by her Father, Emmanuel Jones; Mother, Reverend Mary R. Hodge; Brothers: Michael Hodge and James Jones; Sisters: Mary Adams, Shirley Ivey, Revia M. Odom, and Lula Mae Hodge. Left to cherish her memory and continue in her legacy… Children: Daniel Peterson, Lashay Phillips Samuels (Orville), Archie Phillips, Jr. (Tamarrah), Shawnta Meeks (Michael), Lashawnia Mays, and Kenard Bradford; Siblings: Glenn Jones (Selma), Elizabeth Auguste, Diane Bartee (Vincent), Leroy Hodge, Randolph Hodge, Ralph Hodge, (Barbara), Martha Jones, Lisa Jones, Charles Jones, Harry Jones, Joseph Hodge, and Betty Jones Stewart (Aubry); 22 Grandchildren, 6 Great Grandchildren; and a host of other loving relatives, fellow laborers in the gospel and friends.

Dotsey Faye Dubose, affectionately called, &#8220;Mrs. Dotsey&#8221;, was born December 4, 1948 in Turbeville, South Carolina. She was one of six children born to Reverend Mary R. Hodges and Emmanuel P. Jones. She was educated in the Orange... View Obituary & Service Information

The family of Pastor Dotsey Faye Dubose created this Life Tributes page to make it easy to share your memories.

Send flowers to the Dubose family.