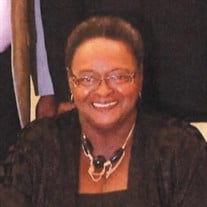 Dorothy H. Rowe, affectionately known as “Ms. Dot, Dot Holly and Grandma Dot”, was born April 23, 1954 in Geneva, Alabama to parents, J.B. Harley and Murtis Harley. In the early years of Dorothy’s life, her house was known as the hangout spot for many of the youth that lived in the East Town Neighborhood. Everyone was always welcomed over to Dorothy;’s house. She took on the responsibility of helping to raise her nephew Brian Milsap and niece, Lashandra Milsap, due to the untimely passing of her sister Juanita. During the summer months, Dorothy would also take in her niece, Takiya Harley-Niblack for the entire summer. For many years Dorothy worked in the private home healthcare sector. She was an independent woman who took total advantage of the North Lake County public transportation system. Dorothy would be seen riding on her scooter as far as the Villages in Lady Lake. She enjoyed riding the bus and she loved riding her scooter around town to two of her favorite places, Wal-Mart and KFC. She was known as the “Chicken Queen” around town. Dorothy was a member of Sisters By Grace, and she also sang with the McKinney Gospel Choir. Dorothy was a faithful member of Sound Doctrine Ministries and served under the tutelage of Pastors Michael and Dawn Ward. Dorothy would put a smile on the face of everyone who was blessed to meet her. She had a humorous way of encouraging despite her condition and would always remind others to “press on regardless”. Dorothy had a loving relationship with her four daughter-in-laws: Latisha, Renee, Katrina and Rona. She had a host of grandchildren, great grandchildren, friends and neighbors with whom she shared a unique relationship and bond. Her sons are thankful for all of the friendships throughout their mother’s life, and forever grateful for Fred Mcleod being like an uncle to them. Dorothy was preceded in death by her Parents: J.B Harley and Murtis Harley; Brother, Lorenzo Harley and Sister, Juanita Milsap. Left to cherish her memory are her Sons: Anthony Harley (Latisha) of Sorrento, Florida, Stevie Harley (Renee) of Mount Dora, Florida, Gregory Harley of Mt. Dora, Florida and Bobby D. Rowe (Rona) of Mt. Dora, Florida; Brother, John B. Harley of Mt. Dora, Florida; 17 Grandchildren; 16 Great Grandchildren; and a host of Nieces, Nephews, Cousins, other loving relatives and Friends.

The family of Dorothy Harley Rowe created this Life Tributes page to make it easy to share your memories.

Send flowers to the Rowe family.