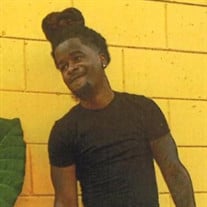 Reflections of Life Devin Davante Johnson affectionately known as “Swift” was born on August 9, 1997 in Orlando, Florida to his proud parents Ms. Margaret Smith Johnson and the Late Mr. Edward Johnson. Devin was educated within the Orange County Public System, his most recent years completed at Edgewater High school in Orlando, Florida. Devin loved working with his hands and enjoyed his employment as a Freelance Carpenter. Devin was preceded in death by Father, Edward Johnson; Maternal and Paternal Grandparents; Sister, Latoya Denise Smith Cunningham; Aunts: Lena Kendall, Lula Austin and Marilyn Smith; Uncle: Willie Lee Austin. Devin leaves to cherish his cheerful spirit and loving memories: A Devoted Loving Mother, Margaret Johnson of Orlando, Florida; one Brother, Darius Johnson of Orlando, Florida; Sisters: Tammela Jones and Nicole Jones, both of Chicago, Illinois Brother-in-law, Carlos Cunningham, Jr. of Mt. Dora, Florida; Aunts: Dora Lewis of Orlando, Florida; Gladys Lewis of Hughes, Arkansas; Uncles: Alonzo Smith of Memphis, Tennessee; Willie Smith of Hughes, Arkansas; Johnny Smith of Grand Rapids, Michigan; Bobby Johnson, Terry Johnson, Elliott Johnson and Tommy Johnson, all of Hughes, Arkansas; Nieces: Christiyana Allen of Orlando, Florida, Christina Cunningham of Mt. Dora, Florida; Trinity Jones, Shatavia Jones and Aniya Jones, all of Chicago, Illinois; Nephews: Christian Smith of Mt. Dora, Florida and Christopher Allen, Jr. of Orlando, Florida; Treshon Jones of Chicago, Illinois; and a host of Cousins, Co-Workers, Classmates and Friends. “Forever In Our Hearts” We thought of you today, but that is nothing new. We thought about you yesterday, and the days before that too. We think of you in silence, we often speak your name. Now all we have are memories, and your picture in a frame. Your memory is our keepsake, with which we will never part. God has you in His keeping, we have you in our heart!

The family of Devin Davante Johnson created this Life Tributes page to make it easy to share your memories.