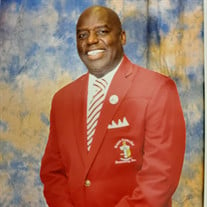 Jerome -- The Beginning Jerome Winifred Godwin was the fifth of seven children born to the Rev. Roscoe and Mrs. Jimmie Christell Godwin on July 23, 1956, in Waycross, Georgia. The family moved to Florida and bought a home in Clermont, Florida. He attended the public school system in Clermont until the summer of 1968, when the family moved to Groveland. Jerome and his family joined the Greater Harmony Missionary Baptist Church (GHMBC) where he participated in the Youth Department and was a faithful member. When his father became the pastor at Mt. Olive Baptist Church in Stuckey, Florida, Jerome moved his membership there in support of his father. The entire family returned to the Greater Harmony Baptist Church after an extended period of time and he served faithfully. Jerome -- The Growing Phase While attending Groveland High School, he participated in sports and various school activities. He served as Senior Class President and graduated in 1974. He attended Mary Holmes College in Westpoint, Mississippi before transferring to Florida Memorial College (now Florida Memorial University) in Miami, Florida in 1975. While there he pledged with the Epsilon Mu Chapter of Kappa Alpha Psi Fraternity, Inc., in the spring of 1976. He was very involved in the many activities of school. He graduated from Florida Memorial in 1979 with a Bachelor’s degree in Criminal Justice and returned to Groveland. He was the biological father of two children, Marty R. Godwin and Tiffany C. Godwin, but was a father figure to countless others. Jerome -- A New Beginning Jerome joined the Kissimmee Police Department in December 1980, where he served in various capacities for 30 years. He was a School Resource Officer (SRO) for many years at Cypress Elementary School, where he touched the lives of numerous young people. He retired from fulltime service in 2018. He remained a Reserve Officer and began to work for the Orange Osceola Safety Institute (OOSI) conducting driver and motorcycle training courses. He also served as a faithful and dedicated male attendant for the Marvin C. Zanders Funeral Home in Apopka, Florida for many years. Jerome was instrumental in the establishment of the Leesburg Florida Alumni Chapter (LFAC) of Kappa Alpha Psi Fraternity, Inc., where he was a Chartered Member and served as the VicePolemarch. He was a charter member (F4) of the Lincoln Park Rams Motorcycle Club. He served as “Road Captain” and former Chaplain for the group. Jerome also served as an officer in the Osceola Visionaries in Kissimmee, Florida. Jerome -- The Final Chapter Jerome was an ordained Deacon, member of the Male Chorus and Usher Ministry at the GHMBC. He became the Chairman of the Deacons and Trustee Boards where he served faithfully until the Lord summoned him home on August 12, 2021. He was preceded in death by his parents, Rev. and Mrs. Roscoe Godwin; sister, Regina Godwin Eason; brother, Stanley Godwin, and brother-in-law, Robert Oliver. He leaves to cherish his memory his son, Marty R. Godwin (LaToya) of Jacksonville, Florida; daughter, Tiffany C. Godwin of Clermont, Florida; two sisters, Linda Godwin Oliver of Leesburg, Florida and Vickie Godwin of Daytona, Florida; four brothers, Deacon Robert R. Godwin (Denia) of Groveland, Florida, Joseph A. Godwin (Patricia) of Leesburg, Florida, Reverend David Godwin of Leesburg, Florida and Darrien Godwin of Daytona Beach, Florida; two grandchildren: Ja’Maya and Genesis, both of Jacksonville, Florida; numerous godchildren, uncles, aunts, nieces, nephews, cousins, and friends.

Jerome -- The Beginning Jerome Winifred Godwin was the fifth of seven children born to the Rev. Roscoe and Mrs. Jimmie Christell Godwin on July 23, 1956, in Waycross, Georgia. The family moved to Florida and bought a home in Clermont, Florida.... View Obituary & Service Information

The family of Deacon Jerome Winifred Godwin created this Life Tributes page to make it easy to share your memories.

Jerome -- The Beginning
Jerome Winifred Godwin was the fifth...

Send flowers to the Godwin family.