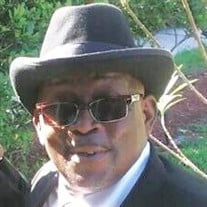 David V. Johnson affectionately known as “Bo or Bowlegs”, was born on January 16, 1953 to parents Eugene and Melvilan Johnson. He was the third oldest of nine (9) children, whom he loved dearly. He attended Miami Edison High School in Miami, Florida. David and family relocated to Tavares, Florida in 1971, and later to the Winter Garden/Orlando area. He was employed with Osceola Council and Aging for over twenty years, serving and preparing meals for Meals on Wheels, the homeless, and the elderly. He also served as Chief Chef for the Osceola County Community. David was awarded a plaque of Excellency, presented by the Mayor and was featured in the Osceola Times for his dedication and service. The Mayor often invited out of town guests to the facility where he worked, to partake of his “soul food’ cooking/meals. David was loved by many people and that love was given in return. He had a special love for his family, mother, children, grandchildren, siblings, nieces, and nephews who were his World. All anyone had to do, was pick up the telephone and he was there. He was only a phone call away. David was an avid sports fan. His teams were the Miami Dolphins and the Florida Gators. He had a great sense of humor. He was always the life of the party, because he kept everyone laughing. His favorite holiday and special time of the year was Christmas. He believed in sharing and each year he presented his siblings with a gift. David was known as “Mr. Fashion”, always looking like he stepped off the page of a GQ magazine. Everything had to be ‘‘Just Right” and matching; his suits and hats, even his sandals and outfit. His Khakis had to be perfectly starched with a crease. David accepted Christ as his Personal Savior in 1980, which was the greatest milestone of all. His faith and trust in God never wavered throughout the years. On March 27, 2022, God called David home to eternal rest. He will truly be missed by those who knew him.

David V. Johnson affectionately known as &#8220;Bo or Bowlegs&#8221;, was born on January 16, 1953 to parents Eugene and Melvilan Johnson. He was the third oldest of nine (9) children, whom he loved dearly. He attended Miami Edison High School... View Obituary & Service Information

The family of David Valentino Johnson created this Life Tributes page to make it easy to share your memories.

David V. Johnson affectionately known as “Bo or Bowlegs”, was...