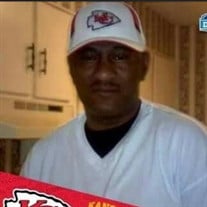 David Banks was born February 17, 1963 in Holly Grove, Arkansas to Daisy Swift and George L. Banks. He was the fifth of eight children. David grew up in Holly Grove where he attended most of his scholastic years in the Holy Grove Elementary and High School system. During his high school years at Holly Grove High, he played football as well as basketball because he was always competitive in everything. He dominated in both sports. David attended Job Corps in Excelsior Springs, Missouri where he obtained his Certificate in Plumbing. He later joined the Armed Forces where he trained as a sharpshooter in Albuquerque, New Mexico for about six months and later separated from the Army. David moved back home and later relocated to South Carolina, where he met Gladys Mims (Hicks). The two later married and had a son, Zachary Banks. David and Gladys later divorced. He moved to Kansas City where he resided for many years. During that time, he met Latonya Drone and the two had a son, Raymond Banks. David worked in landscaping where he worked his way up the ladder to be a supervisor. Even though Kansas City was next to home for him and many of his siblings, he loved the outdoors and always wanted to work in warm climates. He later moved to Florida until he had to retire in 2019 due to illness. His independence was still prevalent up until the day he closed his eyes for the last time. David’s voice began to fade during his last few months of life, but he still knew how to let you know what he wanted and how he wanted it! David was preceded in death by his Maternal Grandmother, Lydia Swift; Mother, Daisy Swift; Father, George L. Banks; 3 Brothers: Otis C. Piggee, Carl Lee Swift, and Lamar “Buddy” Dewayne Swift; 2 Maternal Aunts: Georgia Ladd “Sister” and Mollie Swift; 2 Uncles Lee Swift and C.B. “Mutt” Swift. Left to cherish his memory: Sons: Zachary Banks (Sha’Rita) of Wellsville, Ohio and Raymond Banks of Kansas City, Missouri; Grandchildren: Zachary Isaiah Banks and Za’Kari Latricia Banks, both of Wellsville, Ohio; Brothers: Laymon Piggee of Kansas City, Missouri and Morgan Piggee of Orlando, Florida; Sisters: Etta L. Pigee of Kansas City, Missouri and Rochelle Swift-Smith (Albert Charles) of Apopka, Florida; a host of nieces, nephews, great nephews (too many to count, that loved him dearly); Cousin (like a mother), Vivian Crosby (John) of Kansas City, Missouri, and many cousins that were like brothers and sisters.

David Banks was born February 17, 1963 in Holly Grove, Arkansas to Daisy Swift and George L. Banks. He was the fifth of eight children. David grew up in Holly Grove where he attended most of his scholastic years in the Holy Grove Elementary... View Obituary & Service Information

The family of David Banks created this Life Tributes page to make it easy to share your memories.

Send flowers to the Banks family.