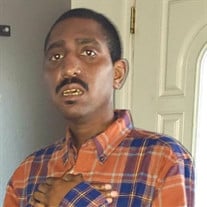 The "Genesis Of Life" began for Darren Andre Rowell Jr. on June 27, 1982 in Orlando, Florida. He was the oldest son born to the Late Cynthia Melvina Howard and Darren Rowell Sr.. "Buster" as he was affectionately known as, had a unique way of gabbing your heart string. "Darren Buster Rowell Jr.- Arthur Man" as he would refer to himself, was the heartof his late maternal grandparents, Elizabeth "Pookie" Tippins and James Arthur Tippins. It was through their love and devotion that "Buster" enjoyed the quality time they afforded him. He looked forward to Arthur taking him on his daily rides to McDonalds for his standard order of a Small fry and small cup of water with 3 pieces of ice or his alone time in the den with Grandma Pookie throwing his pennies, as he watch television and sang along with his favorite show. Buster was a special gift to us, through him we learned the valuable lesson of Agape Love. Wonderful, loving and caring people come in all manner of ways. However, real love shines inspite of their challenges. For man looketh on the outward appearance, but the Lord looketh on the heart." 1st Samuel 16:7b. No matter what, Buster would always remind us, of the geniuness of his heart, by way of his Signature Hugs and Sign Language, "I love you, I love you r's twice as much," He then sealed it with an air kiss and sometimes chase you with his Bat. To know him, was to love him and love him we did. Buster's challenges brought him many wonderful blessings; for more than 22 years he was blessed to have an awesome father figure in his life. God knew what and who he needed. Buster was blessed with Asad Ayube and his family who loved and cherished him as their on and welcomed him into their hearts and their home. God continued to cover Buster with so many support teams: Nianza Green... Support Coordinator (26yTs), Mark Ferguson.. Supportive Living Director (18yrs), Marie Violet.. Support Living Coach (1Oyrs), Patty Montalvo, Personal Living Support(10yrs), Angela Rolley... Behavior Analyst (8yrs); Personal Home Care Staff: Edmond Philippe, Sheila Philippe, Jibreel Garrett, Chris Maldonado. His Special Roommates and friends whowere like brothers for 23yrs. : Joshua Whitehead and Newman Felder; Special Friends and Extended Family (support team): Ismelda Rodriguez, Deen Ayube, Isa Ayube, Jibreel Ayube, Trevelve Williams, Jason Kujawski, Chris Hardy. He was preceded in death by his Loving and Caring mother: Cynthia Melvina Howard; Grandparents: Cute Elizabeth Tippins, James Arthur Tippins, Doug and Willie Mae Rowell. Those left to cherish his memories: his Sister and Legal Guardian: Nacretia Michael and Devoted Brother-in-law: Calvin Michael; Two Brothers: Darius Rowell and Marcus Howard; a host of loving Aunts, Uncles, Nieces, Nephews, Cousins and Sorrowing Friends.

The "Genesis Of Life" began for Darren Andre Rowell Jr. on June 27, 1982 in Orlando, Florida. He was the oldest son born to the Late Cynthia Melvina Howard and Darren Rowell Sr.. "Buster" as he was affectionately known as, had a unique way of... View Obituary & Service Information

The family of Darren Andre Rowell, Jr. “Buster” created this Life Tributes page to make it easy to share your memories.

The &quot;Genesis Of Life&quot; began for Darren Andre Rowell Jr. on June...