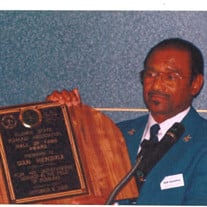 Dan Hendrix was born December 4, 1937 in Sylvania, Georgia. He was the fourth child born to Lee Hendrix and Carriebell Mays Hendrix. Dan attended school in Screven County (Sylvania, Georgia). He later moved to Florida. Dan met Ms. Louise Frazier and the two married on September 14, 1987. One thing as a family we know is when he met her, he promised to take care of her after buying her a frozen push up ice cream. Dan has always been a supportive family man. No matter what was going on in life, he was always there. To know Dan is to know that he would always be willing to help you if you were in need. He never hesitated if you asked him for anything. Dan was employed by W.R. Grace and Co. as a machinist. After 45 years, Dan finally retired, but that did not stop him. He enjoyed welding but most of all, bowling. He continued to be part of the bowling industry at Triangle Bowling Center in Mt. Dora, Florida. For many years he taught elders, children and basically anyone that needed help learning to bowl. Dan Hendrix was the first black President of the Florida Bowling Association. In 1998, he was inducted into the Bowling Hall of Fame. Dan was preceded in death by his Father, Lee Hendrix and Mother, Carriebell Mays Hendrix; Children: Robin D. Tucker and Danny Hendrix, Jr.; Brothers: Lee Hendrix, Jr., Robert Lee Hendrix, William Hendrix, Martin Hendrix and Harold Spencer Thompson; Sisters: Ida Bell Holloway, Sharon Hendrix, Mary Jones and Georgia Ann Anderson. Left to cherish his precious memory are his loving Wife, Louise Hendrix of Mt. Dora, Florida; Children: Lenora Hendrix of Delray Beach, Florida, Cynthia Wilson of Fruitland Park, Florida, Mary L. Hendrix of Deerfield Beach, Florida, Sincerray Hendrix of Lake Worth, Florida, Deberl A. Hendrix of Delray Beach, Florida, Teresa R. Frederic of Leesburg, Florida and Danny Hendrix (Beth) of Lady Lake, Florida; Siblings: Joyce Smart (Squire) of Sylvania, Georgia; Genetha Pelzer of Sylvania, Georgia, John Hendrix (Renee) of Mt. Dora, Florida, Henry Lee Hendrix (Renee) of Ft. Lauderdale, Florida and Marvin Hendrix of Atlanta, Georgia; Sister-in-law: Mary Thompson of Ft. Lauderdale, Florida; Special Goddaughters: Diane Morris of Delray Beach, Florida and Melanie McKnight of Mt. Dora, Florida; Sons-in-law: Cleveland Roundtree of Delray Beach, Florida and Cedric Chandler of Dania Beach, Florida; and a host of Grandchildren, Great Grandchildren, Nieces, Nephews, Cousins and other loving relatives and friends.

The family of Dan Hendrix created this Life Tributes page to make it easy to share your memories.

Send flowers to the Hendrix family.