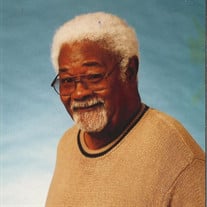 D.S. (Nathaniel) SUMMERS was born in St. George, South Carolina on April 19, 1937 to Shelly and Ora Summers. He was their third child. His father, Shelly Summers Sr. and Ora Summers were born in St. George SC. On September 1949 at the age of 36, while living in Mappsville Virginia, Shelly was tragically killed in a car accident. At an Early age, he learned how to be a strong provider. He understood the importance of being a strong leader and role model for his younger siblings. The skills he learned built a foundation for his adult life as a father, husband, church member and leader. On March 30, 2020, D.S. made his transition into the hands of his heavenly father. D.S. (NATHANIEL) SUMMERS was a man of his WORD. Man of Faith In 1958, in Pahokee, Florida, Nathaniel first met Azalene Hall. They were married for 60 years. He believed in family and marriage. They had two children. Nathaniel believed so much in family, that he would round up the family and children and made sure that everyone was getting the Word of God. He took everyone to church with him and if the car was full, he made the kids walk to the church. We still had to beat him to the church. We could not be late. FAMILY Nathaniel was always encouraging family gatherings. Every summer, he would take us to meet different family members from Carolina to Georgia and New Jersey. He made sure we were going to see family. He was a Serious and Dedicated man. Once he said it, it was going happen! Whatever he said, he believed in what he was talking about. If Nathaniel said, “I was going to whip you” then he was going to whip you. Nathaniel built his life around his community, church and family. COMMUNITY He believed in giving everyone the RESPECT due to them. He said, “You respect everybody, and you expect them to respect you." As a friend and neighbor, he always made himself available to assist others. Nathaniel would always make it his business to lend a helping hand to others. Every voting season he would round up the elderly and take them to vote. When church was over, he would stay behind to make sure all tasks was completed. He would not leave until everything was accounted for. He loved his church, pastor and above all the Word of God. The Family Preceded him in death, his father and mother,: Shelly and Ora Summers, had 11 children: Jessie James, Shelly Jr, Nathaniel, Mary Alice, Altomese, Leroy, Florine, and Alonzo. Nathaniel leaves to celebrate his life and legacy; his wife of 60 years: Azalene Summers; daughter: Connie Graham and son: siblings Alphonse Hudson; Barbara Ann, Mary Lee and Viola (all from the Central Florida area.)

The family of Brother D S "Nathaniel" Summers created this Life Tributes page to make it easy to share your memories.

Send flowers to the Summers family.