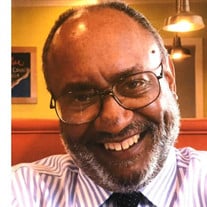 Craig Arnold Smith was born September 15, 1960 in Rosieres-en-Haye, France to parents Odell F. Smith and Alfretta E. Smith. Following graduation from Potomac Senior High, in Oxon Hill, MD, Craig joined the Air Force, where he became an Aircraft Electronic Technician and rose to the rank of Tech Sargent. Craig loved the Lord and accepted him as his personal Savior. He was a faithful member of The Experience Christian Center until he took ill. Craig was the quintessential “people person” with a real zeal for life. He genuinely cared about others and would jump in the car at a moments notice and drive great distances to visit or help a friend in need. Craig was always quick to ask how others were doing with a truly genuine interest in hearing the answer. He always listened attentively and with a sincere concern. Craig was a thoughtful and generous person, always willing to lend a hand to anyone, including strangers. He was always quick to let others know of his love for them. He would often tell friends and family that they were his “favorite.” Craig loved Jazz music, films and the arts. He enjoyed playing the saxophone and jamming with others. But most importantly, he loved his wife Gail and he made sure she knew that she was the most important person in his world. Craig was preceded in death by his Mother, Alfretta Smith and Sister, Lovetta Smith. Left to cherish his memory are his loving Wife, Gail T. Smith of Orlando, Florida; Father, Odell F. Smith Sr. (Marva) of Alachua, Florida; Son, Craig A. “Cas” Smith, Jr. (Mandy) of San Antonio, Texas; Daughter, Cory M. Smith of Tallahassee, Florida; Stepdaughter, Maria Saulsby (Cameron) of Orlando, Florida; Stepsons: Mark Timmons (Sheyee), Solomon Timmons (Brittany), Timothy Timmons, Tarrance Timmons (Irene), and Michael Timmons, all of Orlando, Florida; Siblings: Odell “Bubby” Smith, Jr. (Eisa) of Clinton, Maryland, Jonathan Bey (Erica), and Tracy Moring (Howard), both of Gainesville, Florida; Grandchildren: Wesley, Alaiya, Amaya, Ayva, Ryan, Aala, Jaden, Kendall, and Jaxson; and a host of aunts, uncles, nieces, nephews, cousins, other loving relatives and friends.

The family of Deacon Craig Arnold Smith created this Life Tributes page to make it easy to share your memories.