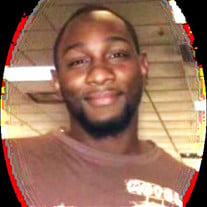 Cornelius Garrison (Gary) Rogers, son of Clotelia Rogers and the late Thomas Jean Rogers, Sr., was born in Miami, Florida on November 2, 1980. Gary was the third child of five children, He attended public school in Miami Dade County. On September 17, 2021, Gary passed from this life into eternal life. Gary had four beautiful daughters (Rehquaiya, Alaysia, Da’Shia and Noelle) whom he loved dearly and always tried to make them be a part of his life. Gary always wanted his daughters to remain unified and share the love for each other that he had for them. He enjoyed feeding the ducks with his daughters, fishing, and cooking for his mom. Gary held many jobs where he learned life skills that he would utilize throughout his life. Gary was always trying out new recipes that he created and surprisingly, the recipes were good. Gary was the family jokester and loved making people laugh. He was the life of any party and always tried to make people feel welcomed. Gary enjoyed meeting and mingling with people from all walks of life and easily interacted with them. Gary was a natural at making friends and welcoming them into his home. Gary was a very forgiving person and walked in love. Gary believed in sharing and helping others in need. He was protective of his family, and he was an encourager. Gary gave his life to the Lord at an early age and would share the salvation message to whomever would listen. Gary is survived by his four Children: Rehquaiya, Alaysia, De’Shia and Noelle; one Grandson, Amari; Mother, Clotelia; Siblings: Roderick, Thomas II, (Dania), Adam, and Johnathan; Aunts: Virgie (David), Dorothy (Kevin), Margaret (Robert), Willie Mae, Uncles: Lee, William C., and David Butts; Cousins: Clora (Percy), Albert (Carla), Regina, Willis (Allysia), Lashanda, Eric, David Jr., Michael, James (Venesia), Trisha, Kappuzine, Cory, Angela, Edith Nicole, Ralph, Shelia, Desmond (Cindy), Andre, Xavier, Byron, Jelani, Nia, Sean, Shanari, Andre, Tiffany, Brittany, Candace, Marquis and a host of other family members and friends too numerous to list. His memory will forever live in the hearts of his family and friends until they are together again in heaven.

The family of Cornelius G. Rogers created this Life Tributes page to make it easy to share your memories.

Send flowers to the Rogers family.