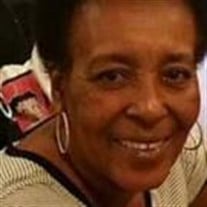 Clara M. Dubose Saffold, affectionately known by her family as “Classy Mae” or “Cat Mae” was born May 31, 1955, in Orlando, FL. She was the third child and second daughter of the late John H. and Ethel Pearl Dubose. Clara was an extraordinary woman with many amazing attributes. She was a constant source of strength, even from the time that she was a child. She had a reputation for ferociously protecting her children and grandchildren. As the Matriarch, her family was the light of her life! She cherished each one of them and was the epitome of unconditional love. One of her greatest joys was the monthly family gatherings, which consisted of soulful cooking, watching television, playing music, and dance contests. An avid crossword puzzler and a card game connoisseur, you could often find Clara teaching her grandchildren the joys of her pastime. She and her husband loved to be surrounded by their immediate family, extended family, and friends. Together they enjoyed the art of fishing, playing cards, reminiscing, dancing, or just listening to “oldie goldies”. She was preceded in death by her parents: John H. and Ethel Pearl Dubose, great-grandson: Raheim Atwell-Furness, brothers: John. L. and Alphonso Dubose, sisters: Betty J. Dubose-Dunkley, Rose M. Dubose, and Tara Dubose Williams. Mrs. Clara Saffold is survived by the love of her life, her husband, Richard E. Saffold, whom she was united in marriage for 51 years. As a result of their union, they had four beautiful daughters, Teresa Saffold-Washington, Tracy Watson (Willie), April Saffold (Thomas), Lawanda Saffold (Damon), and a bonus daughter Johnique Keith-Berry (James), 12 grandchildren, and 17 great-grandchildren.

The family of Clara Mae Dubose Saffold created this Life Tributes page to make it easy to share your memories.

Clara M. Dubose Saffold, affectionately known by her family as...

Send flowers to the Saffold family.