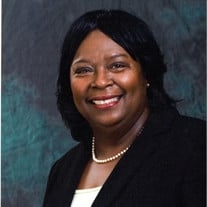 To view the service for Clara Sue McMillian Davis's live stream please use the link below: www.facebook.com/ZandersFuneralLIVE Clara Sue McMillian Davis passed away on January 10, 2021, peacefully at home surrounded by her loving family. She was born on March 1, 1950 in Winter Garden, Florida. Clara was the eldest child of Dorothy Jean McMillian. Ms. McMillian died during childbirth when Clara was 20 years old, leaving Clara to care for her three younger siblings. Clara graduated from Charles R. Drew High School, Winter Garden, Florida in 1968. She was a second-generation Florida A&M University college graduate. Thus, she developed a passion and desire to one day matriculate at Florida A & M at an early age. She never wavered from that dream. Clara received her BS in Business Administration from Florida A & M University in 1972 and MBA from Florida Tech, formerly Florida Institute of Technology, Melbourne, Florida in 1982. Upon graduation from FAMU, she landed a job with Harris Corporation, formerly Radiation, a Subsidiary of Harris at the time as a Jr. Project Planner. As the first salaried, degreed woman of color hired in the Controller's organization, Clara had a prolific and rewarding career. She held positions of increasing responsibilities as a key contributor on major program pursuit teams, negotiation teams, cost management control, course developer, trainer, publisher and subject matter expert in the field of Earned Value Management. She traveled extensively in her various assignments and established a wide circle of business associates and professionals in both the private and government sector. She obtained her Project Management Professional (PMP) Certification in 2013. After 40 years, she retired from Harris Corporation in 2012 and immediately started working on her bucket list that included pursing her lifelong desire to hone her musical and artistic skills, traveling, consulting and writing. She started playing the flute, after 40 years, and joined the Brevard Community Band. She loved to write, authoring the Alpha Kappa Alpha Iota Pi Omega Chapter history book, “Timeless Service: Priceless Memories” and published an article that was featured in The Florida Today Newspaper. Additionally, she loved to dance and could be found weekly with the ‘Move Your Body Soul Steppers’. Clara was a devoted member of the community. She had a passion for volunteering and spent countless hours, uncompensated time, energy and personal money to the betterment of her community. She was a humble servant and often preferred to stay in the background. Clara gave 110 percent and then some to all her endeavors and children and education were her passion. She was a big kid in mind, strong believer in early childhood intervention and believed that every child deserves a childhood, a support system and an opportunity to dream. She treated each one of the children as one of her own with due respect and compassion for each and everyone. She was active in several organizations including: Florida A & M University National Alumni Association, Alpha Kappa Alpha Sorority, Inc, Harris Corporation Retirement Association (HCRA), Project Management Institute, Club Esteem and Community Read & Feed. She also served on the Brevard County School Employee & Teacher of the Year selection committee and was Assistant Archivist Volunteer at Florida Tech. Since 2000, Clara and her husband Don, served as chairpersons of the Florida A&M University National Alumni Association Brevard County Chapter, "Excellence with Caring" Scholarship and Awards Benefit. Together their efforts have led to nearly $200,000 in scholarship funding and secured a spot among chapters within the NAA for innovative and impactful event execution. In 2010 she received the Distinguished Alumni Award from Historically Black Institution Alumni Consortium. A lifetime member of FAMU NAA, in 2012 she was named Florida A&M University’s 125 Outstanding Alumni of the Quasquicentennial Award. Clara was a devoted Life Member of Alpha Kappa Alpha Sorority, Inc. She was initiated into Beta Alpha chapter on May 15, 1969. She served in various capacities on the local and regional level and was named Soror of the Year in 2008. She accepted Christ at an early age at St. Paul A.M.E. Church, Winter Garden, Florida. Upon moving to Melbourne, she became a member of Allen Chapel A.M.E. church and in later years joined Mt. Moriah Missionary Baptist Church, where she founded the Genesis Youth Enrichment Program. She dedicated herself to a Christian life, her family and the betterment of her community. Clara was preceded in death by her parents, Charles Weaver and Dorothy McMillian and son, Brian Sherrod. She is survived by her husband, Don Davis (her beloved DD) of Melbourne, Florida; daughter, Brandi Vaughn (Gerard) of Atlanta, Georgia; three stepdaughters: Roshunda Harris and Donna Michelle Fisher, both of Tampa, Florida, and Kenya LaTasha Davis of Tallahassee, Florida; two sisters: Oleeta Christian (Willie) of Winter Garden, Florida and Lila Farmer of Atlanta, Georgia; one brother, Glenn Farmer of Winter Garden, Florida; three nieces: Tiffany Mason (Nicklaus) of Atlanta, Georgia, Ebony Cousins (Dave) of Daphne, Alabama; Shukrije Dority (Jared) of Davenport, Florida; one nephew, Bobby Farmer of Ocoee, Florida; grandchildren: twin granddaughters Lauryn Claire & Grace Elaine Vaughn, Toni Jade Fisher, Shandreia Cody, Charles Cody, Brittany Davis, Kenyatta Davis, Tiana Davis, DeQuan Davis, Asia Butler, Terrius Smith, Antonio Harris, Courtney Harris and Rodtez McKenzie; goddaughter, Helen R. Zanders, Sisters-in-law, Brothers-in-law, cousins and many sorrowing friends. Clara was a wonderful Wife, Mother, Grandmother, beloved Sister and Friend and will be deeply missed.

The family of Clara Sue McMillian Davis created this Life Tributes page to make it easy to share your memories.