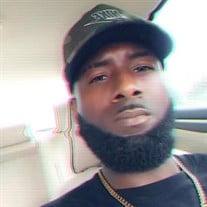 On November 30, 1989, the world was blessed with Christopher Lee Smith. During his time with us, Christopher-affectionately known as “Chris,” “Chris Stylez” and Chris Marlin Smith made a significant impact on the lives of those he encountered. Chris’s grandmother Betty Culpepper-Urquhart, proudly reared him as her third child along with his aunt Beverly Smith, who loved him as her little brother and son she never had. Chris attended the primary and secondary schools in Orange County and graduated high school from Florida Youth Academy. He continued his educational journey at Valencia College and Florida Christian Bible College. As a profession, Chris made significant achievements working in sales. Chris was intrinsically gifted and manifested his love for art, poetry, and music by creating and producing original pieces; consequently, his talent yielded him lucrative opportunities. He loved exploring unchartered waters and unconventional methods. Chris brought much joy to his peers using his musical abilities! In addition to creating and producing music and poetry, Chris was on a quest for knowledge. At an early age Chris joined Pine Hills Community Church (PHCC). He was involved in the Children’s Choir and grew up to become an awesome youth leader. Chris had an insatiable desire for knowledge that manifested through his pursuit of biblical studies. His life demonstrated that he loved God and people. He enjoyed studying biblical principles and sought various opportunities to increase his knowledge. Chris worked with youth leaders to promote and conduct Bible Studies for youth and young adults. Chris was adamant about sharing the Gospel with others and often encouraged young people to learn and participate in activities that would enhance their spiritual growth and development. Despite his abbreviated presence, Chris leaves his family, friends, and teachers with pleasant and impactful memories that will last a lifetime. Chris’s father, Alvin Smith Jr. preceded him in death in 2019. To cherish his memory, Chris leaves behind his wife: Ebony Smith of Orlando, Florida; his grandparents: Betty Culpepper-Urquhart of Orlando, Florida and Minister Alvin Smith L. Sr. (Nesline) of Miami, Florida; his brother: Michael Smith of Atlanta, Georgia; his aunt: Beverly Smith of Orlando, Florida; a host of other relatives, cousins and many devoted and close friends.

On November 30, 1989, the world was blessed with Christopher Lee Smith. During his time with us, Christopher-affectionately known as &#8220;Chris,&#8221; &#8220;Chris Stylez&#8221; and Chris Marlin Smith made a significant impact on the lives... View Obituary & Service Information

The family of Christopher Lee Smith created this Life Tributes page to make it easy to share your memories.