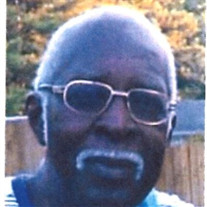 To view the service for Charlie W. Fortson's live stream please use the link below: www.facebook.com/ZandersFuneralLIVE A time to be born... We've come to celebrate the life of the late Sgt. Charlie W. Fortson, born July 10, 1948 to the late Senoia and Mamie Lou Fortson in Lexington, Georgia of Oglethorpe Country. He confessed to Christ at 12 years old. A time to learn... Charlie was raised in Orlando, Florida; he attended the public schools of Orange County, Florida, graduated in 1967 from Jones High School, and was also a member of his high school band during, and after graduating. Charlie was lovingly called "BIG BOY" by family, friends, and neighbors. Charlie was the jack of all trades. He loved his yard and enjoyed spending time with his family. He really knew what being a BIG BRO was to his siblings. he was more than a provider to his wife, daughters, and his only grandson. He was a bestfriend, playmate, teacher, and a great listener. He was a man of few words but, what is understood didn't have to be explained. He was a loving, kind, strong, gentle giant. Charlie retired from Lynx after serving the Tri-Counties for 27 years. A time to marry... On March 17, 1984, Charlie married his soulmate in hold matrimony, Bernice B. Fortson, who preceded him in death November 2011. Mr. Fortson was called home by Our Heavenly Father at 6:19 p.m. on May 24, 2021. Preceding him in death, two brothers Roosevelt Echols, Columbus, Ohio, and K.C. Fortson, Orlando, Florida; and one brother-in-law, David Dyer, Loganville, Georgia. He leaves to cherish his memory, two daughters, Linda Nicole "Nikki" Boles, Atlanta, Georgia, and Vivian "Michelle" Pope, Orlando, Florida; his only Grandson, Jerome "Rome" Finklea Jr., Atlanta, Georgia; one sister, Jo-Ann Dyer, Loganville, Georgia; one special brother, George Fortson (Alma), Orlando, Florida; two sisters-in-law, Luvenia Echols, Columbus, Ohio, and Marva Fortson, Orlando, Florida; and a host of nieces, nephews, great-nieces, great-nephews, a host of cousins, other relatives, and many sorrowing friends.

To view the service for Charlie W. Fortson's live stream please use the link below: www.facebook.com/ZandersFuneralLIVE A time to be born... We've come to celebrate the life of the late Sgt. Charlie W. Fortson, born July 10, 1948 to the late... View Obituary & Service Information

The family of Charlie W. Fortson created this Life Tributes page to make it easy to share your memories.

Send flowers to the Fortson family.