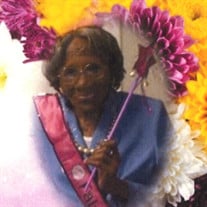 Mother Cassie Lee Wilks was born May 18, 1918 in Amsterdam, Georgia to Mrs. Jessie and Johnny Milton. She was one of four siblings. She was educated in the public school system of Georgia. She was an avid basketball player in school and remained a basketball fan. Her favorite professional basketball team was the Orlando Magic. She had an opportunity to meet the basketball player Bo Outlaw at her 101st birthday. She worked for the public school system of Georgia. Mother Cassie was very passionate about her relationship with God. She loved the Lord and her family. She accepted the Lord at an early age and has been serving the Lord during her lifetime. She was a member of Warner Hill Baptist Church of Thomasville, Georgia where her husband Reverend Andrew Wilks was the pastor. After moving to Florida later on, she joined First Missionary Baptist Church of Groveland, Florida, where her son Bishop Isaac D. Wilkes, Sr. is the pastor. Mother Wilks was active in Sunday School and the Mother’s Ministry and anything that she could do in the church until she became ill and could no longer attend Church on a regular basis. However, she remained faithful until the Lord called her home. Mother was well known by all for her sense of humor and her cooking. She made biscuits that literally melted in your mouth. Anything she cooked she cooked from “scratch”. The family will miss her cooking and wisdom. She was married to Reverend Andrew Wilks, the mother of three children, Mary Alice, Betty and Isaac. She was preceded in death by her husband, Reverend Andrew Wilks, daughter, Mary Alice Crapp, mother, Mrs. Jessie Milton and Father, Mr. Johnny Milton, brothers, Guy, Joe and John Milton, four grandchildren, Wanda, Glen, Jean and Lossie and three great grandchildren. She leaves to cherish precious memories to two children: Betty Brown of Groveland, Florida and Isaac D. Wilkes, Sr. (Margie) of Mascotte, Florida; twenty-four grandchildren: fifty-eight great grandchildren: fifty-nine great-great grandchildren: five great-great-great grandchildren: a special niece: Arzina Bradshaw and a host of other relatives and friends.

Mother Cassie Lee Wilks was born May 18, 1918 in Amsterdam, Georgia to Mrs. Jessie and Johnny Milton. She was one of four siblings. She was educated in the public school system of Georgia. She was an avid basketball player in school and remained... View Obituary & Service Information

The family of Cassie Lee Wilks created this Life Tributes page to make it easy to share your memories.

Send flowers to the Wilks family.