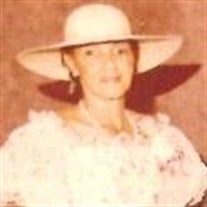 Carrie M. Dean’s early education in life was spent in the school systems of Tallahassee, Florida, and she graduated from Eustis High in Eustis, Florida. After graduating from high school, Carrie enlisted in the United States Army on July 15, 1952 and served until June 16, 1954, when she received and Honorable Discharge. After serving her country, Carrie went on to receive a bachelor’s degree in Education from Florida A&M University in Tallahassee, Florida. She then earned her master’s degree in Education from the University of Central Florida in Orlando, Florida. She was an educator for more than thirty one (31) years in the Lake County Florida Public School System before retiring. Throughout her tenure, she was an inspiration and mentor to many of her students and colleagues. Carrie made her home in Clermont, Florida, where she worked and raised her family. She loved working in her yard and gardening was truly her main hobby along with word search and crossword puzzles. She also had a love for jazz music which was known by all her close acquaintances. In addition, Carrie was a long time faithful member of the Lend A Hand Club in Clermont. She was a kind and gentle-spirited person and lived a very private life. However, everyone who really knew her well was aware that the highlight of each year for her was attending the annual Black and White Ball in Orlando. She was also a faithful member of the New Jacob Chapel Missionary Baptist Church of Clermont, FLorida and as such, she received the Lord into her heart early in life and gave her best service in His Kingdom. Carrie M. Dean lived a beautiful life and was blessed to be surrounded by all the people that loved and cared for her until transitioning to her heavenly home. She was preceded in death by her Mother, Sarah Hall; Father, Oscar Hall; Daughter, Cassandra Christie; Granddaughter, Alexandra Christie; and 4 Siblings. Left to cherish her memories: Daughters: Sabrina Brockenbury of Clermont, Florida and Kimberly Dean of Clermont, Florida; Sibling, Mary Hall; Grandchildren: William Brockenbury, Justin Isom, Tyler Isom; and Great Grandchild; and a host of other loving relatives and friends

Carrie M. Dean&#8217;s early education in life was spent in the school systems of Tallahassee, Florida, and she graduated from Eustis High in Eustis, Florida. After graduating from high school, Carrie enlisted in the United States Army on July... View Obituary & Service Information

The family of Carrie M. Dean created this Life Tributes page to make it easy to share your memories.

Carrie M. Dean’s early education in life was spent in the school...

Send flowers to the Dean family.