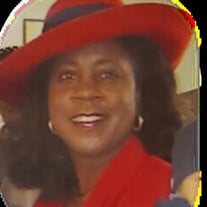 Carolyn Burnett Richardson Frazier became an angel on Sunday, March 27, 2022 at the age of 73. She was surrounded by her family. Carolyn was the fifth child born to Rollie and Martha J. Richardson in Clarcona, Florida on September 13, 1948. In 1950, she relocated with her family to Apopka, Florida. She attended Sunday school and church regularly, and eventually joined St Paul A.M.E. Church where she accepted God as her Savior. Carolyn attended Phyllis Wheatley Elementary/Junior High School, where she earned her high school diploma and graduated in 1966. She enjoyed playing basketball, performing as a majorette and she was an outstanding academic student. She was the salutatorian of her class. She loved learning. In the fall of 1966, Carolyn matriculated to Florida A&M University, where she earned a Bachelor of Art Degree in Elementary Education. In 1972, after working two years in Orlando, she returned to Florida A&M University to pursue a Master of Art degree in Education and worked as an instructor at the FAMU Developmental Research School. During this time, she met and married Robert Frazier. They moved to Daytona Beach, Florida where she continued her career as a teacher. Carolyn was quite an adventurous educator, always in preparation to step onto the next rung of “Jacob’s Ladder”. In 1978, she earned a doctorate degree from Florida State University, becoming the second graduate of Phyllis Wheatley to earn a doctoral degree. She continued to work as a high school counselor, a job she truly loved. She had a passion for guiding, preparing, and motivating students to be the very best they could be as she would later take on the role of Principal. Carolyn dedicated 31 years of untiring service to the Volusia County School System. After retiring, Carolyn relocated to Apopka (Home), where she continued to work in the church. She followed her mother’s footsteps by occasionally chairing the Martha Jay Richardson Family and Friends Day. In the community, she organized a College Day Fair to be held each year to educate students and parents on all the intricacies of preparing for college. She was an avid recruiter for Florida A&M University though she helped students to enroll in any college of their choice. “If there was a will, she made a way.” She visited schools and homes begging teachers and parents to encourage their students and children to prepare for college. She was truly a motivator. Even while in the hospital, Carolyn counseled a student who called her. She never once mentioned her illness or the flight that she was preparing to take. She was only concerned with giving him guidance in order for him to successfully fly. Carolyn was all about her Father’s business when it came to helping students prepare for college for a better life. Her community involvement include: Delta - Beta Alpha Chapter - “The Modnificent 22”, fall of 1967. Juanita Davis Reed, line president. Carolyn was planning the 55th reunion for the line that was to be held at the 2022 Florida Classic. ~Florida A&M University Alumni Association, Former President of the Volusia Chapter. ~Active Member of Apopka Progressive Senior’s Club ~Talent Search Director - A program focused on aiding children who were interested in going to college. ~Phyllis Wheatley Mass School Reunion, Chairperson Carolyn was friendly, loved people, had a smile for everyone, always had an encouraging word for any and every one she met. Carolyn loved her Lord and Savior Jesus Christ, her children, her family, the Church, Florida A&M University, Delta, fashion, and good food. However, her most precious joy was her children, Suzanne and Raphael and grandchildren, Shamaar and Twyllah Carolyn. She loved them dearly and would talk about them to anyone who would listen. Carolyn was preceded in death by her parents, David Rollie and Martha J. Richardson. She leaves precious memories to be cherished by, her adoring children: One Daughter, Suzanne Frazier of Daytona Beach, Florida; One Son, Raphael Frazier of Apopka, Florida; Two Grandchildren: Shamaar Frazier and Twyllah Frazier, both of Daytona Beach, Florida; One Sister, Barbara Rouse of Apopka, Florida; Four Brothers: Rollie Richardson, Jr. (Delores) and Michael Richardson, both of Wilmington, Delaware; Sam Curtis (Shirley) and Charles Richardson (Annette), both of Orlando, Florida, and a host of lovely Nieces, Nephews, Cousins, Other Relatives and many devoted Friends.

Carolyn Burnett Richardson Frazier became an angel on Sunday, March 27, 2022 at the age of 73. She was surrounded by her family. Carolyn was the fifth child born to Rollie and Martha J. Richardson in Clarcona, Florida on September 13, 1948.... View Obituary & Service Information

The family of Dr. Carolyn Richardson Frazier created this Life Tributes page to make it easy to share your memories.

Send flowers to the Frazier family.