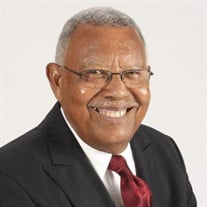 In lieu of flowers, the family is requesting a donation be made "In memory of Mr. Billie L. Dean" to the 123 Agricultural Scholarship Fund. Please make checks payable to "LYMUS Boys Inc." P.O. Box 1012 Apopka, Florida 32704 To view the service for Billie L. Dean's live stream use either of the two links below: https://control.resi.io/webplayer/video.html?id=130c7382-5c8b-45f6-94cc-dd8564458b71 www.facebook.com/ZandersFuneralLIVE Billie Lewis Dean was born April 10, 1931 to Arthur and Ida Dean in Clermont, Florida. The oldest of three children, Billie was raised in a family that loved God. He grew up as an active member of Jacobs Chapel Baptist Church of Clermont. Billie believed in perseverance, hard work, integrity and was a social icon that could be described as never meeting a stranger. In the 1940's, there were no high schools for African-American children in Clermont. Determined that their son would receive an education, when Billie turned 14, his parents rented him a room in Orlando. He relocated and attended Jones High School. He would catch the Greyhound bus home every Friday afternoon and return to Orlando every Sunday, after church. During his senior year at Jones High School, Lake County School Board decided to transport African-American students from Clermont to Eustis Vocational High. It was then that Billie moved back in with his parents. He traveled 26 miles daily to receive an education. After high school, Billie attended Florida Agriculture & Mechanical University in Tallahassee, Florida. While attending college, he was drafted into the United States Army. He served as sergeant in the Korean Conflict. In 1954, he was a double recipient of Bronze Stars with Valor for Heroism. Following his completion of the military, Billie returned to FAMU and resumed his education. He received a Bachelor’s Degree in Agriculture and Master’s Degree in Agriculture and Administration & Supervision. Billie began his teaching career in Clermont, where he worked as a science teacher for two years. For thirty-six years, he taught as an Agriculture Instructor in Apopka at Phyllis Wheatley High and Apopka High School. He was a mentor and role model for many. In 1979, Billie relocated to Apopka and made it his home. In 1994, he became Apopka's second Black City Commissioner. He was a “Commissioner for All People.” He served as Commissioner for 24 years and as Vice Mayor for the last 2 years. He was an entrepreneur where he owned and operated his own landscaping business and real estate properties throughout Central Florida. For more than 50 years, Billie served as Senior Male Attendant for Marvin C. Zanders Funeral Home. Highlights of his accomplishments are: Member of the Florida League of Cities, CARET Representative for Land Grant Colleges and Universities on behalf of Florida A&M University, 100 Black Men of America and Board Member of the Lake Apopka Natural Gas. He served as a Monitor for Orange County School’s desegregation plan. Billie was the Recipient of the 2001 Florida A&M Distinguished Alumni Award. In 2007, he received The Marvin C. Zanders Humanitarian Award. In 2010, with the assistance of his colleagues (John Cloran, Peter Jordan, Alexander Smith) and the City of Apopka, he established the Billie L. Dean Community Garden. In 2014, Billie was inducted into the Florida A&M University College of Agriculture and Food Sciences-Gallery of Distinction. He was also inducted into the Apopka Sports Hall of Fame as a Civic Honoree for his many years of community service and dedication to the City of Apopka. He received the Orlando Alumni Chapter of Kappa Alpha Psi Fraternity award for Great Community Service and the Rufus C. Brooks Civil Rights Award from the Orange County Branch of the NAACP. December 2019, the City of Apopka dedicated The Billie L, Dean Community Center in his honor. He was a dedicated and faithful member of Mt. Pleasant Missionary Baptist Church of Orlando. He served as a member of the Trustee Board. Billie lived a long and prosperous life, leaving a legacy that will be cherished by all who loved him. Those who knew him would say without a shadow of a doubt, he was a humble man who love to serve, lend a hand and be of help wherever he was needed. He was preceded in death by his Parents: Arthur and Ida Dean; Daughter: Cassandra Dean Christie; Granddaughter: Alexandra Christie Johnson; Brother: Albert Dean. He leaves to cherish his legacy and memories: a loving and devoted wife of 44 years: lsadora Moye Dean; Children: Sabrina Dean Brockenbury, Kimberly Dean both of Clermont, Kitrina Dean Henderson (Norris) of Apopka, Ryan Lewis Dean, Orlando; Grandchildren: William Brockenbury, Justin Isom, Tyler Isom, Jacob “Baby Boy” Henderson; Sister: Amy Dean Jones, Alexandria, VA; Aunt: Taisy Parker, Trenton, NJ; Brother-in-law: Isaac McCall (Lillie Dell) Quincy, FL; Sister-in-laws: Ametta Moye, Orlando, FL, Daisy Saunders, Sarasota, FL, Beth Dean, Orlando, FL, Juanita Johnson and Corine McCall both of Quincy, FL; Two Devoted Nephews: Demetrius Jones, Washington, DC and Glen Jones (Maria), Long Island, NY; Devoted Niece: Deanna Darlington (Linphord), Washington, D C. One Goddaughter: Jennifer Neal Mitchell; Four Godsons: Michael Wilkerson (Brenda), Rev. Alexander H. Smith (Linda), Sean Bradford and Pastor Timothy L. Ford (Cassandra), a host of other relatives and sorrowing friends.

In lieu of flowers, the family is requesting a donation be made "In memory of Mr. Billie L. Dean" to the 123 Agricultural Scholarship Fund. Please make checks payable to "LYMUS Boys Inc." P.O. Box 1012 Apopka, Florida 32704 To view the service... View Obituary & Service Information

The family of Billie L. Dean created this Life Tributes page to make it easy to share your memories.

In lieu of flowers, the family is requesting a donation be made...

Send flowers to the Dean family.